Since I can’t be with my husband this Valentines I thought I would take step back and write about how I met him. 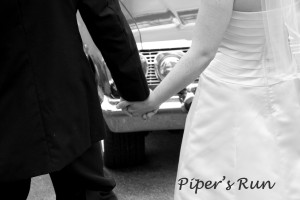 After finishing my Recreation Management Degree at  Acadia University in December of 2002, I moved to Ontario to work at an Outdoor Centre for the winter season; teaching cross-country skiing, snowshoeing, building and sleeping in a Quinzee, Campfires etc. I then went back for the Fall 2003 and Winter 2004 seasons. Then back to Nova Scotia for what I thought was the rest of my life.

In December of 2005 I took a big leap and accepted a full-time job at the Outdoor Centre in Ontario.  I moved away from my whole family and friends for something I was passionate about. Working in the outdoors, year round. BEST DECISION OF MY LIFE!

The following March (2006) Sai came up from Carbondale, Illinois to volunteer at our Outdoor Centre where he was a previous employee – before my time from 2000 – 2002 (we actually just missed each other by a few months). He was supposed to be with us for about a week ….. he ended up staying two weeks!

My boss told me Sai had arrived at the camp and for me to connect with him over lunch. I was running late for lunch and there was one seat left in the dinning hall. Right next to Sai. I sat down and said hello, then blurted out “what’s your story”? Seriously, that’s what I said – not even “hi, how are you?” or “how was your drive?” “What’s Your Story” is what I said – not knowing a single thing about this man.

I was responsible for making sure he was assigned to a group and supporting him with any program related needs. No problem.

Thursday: Another staff member, Sai and I had a meeting in the afternoon about the group they were working. As we wrapped up the meeting and headed back downstairs to our offices he asked if he could come over to my place and watch CSI later that evening. Now, my little duplex cottage was a 20 second walk from the staff housing he was staying in – where there was a TV. I said “yeah sure, come on over, it’s on at 10 pm. See you later”.

And he did! At this point I thought he was just wanting to watch CSI without any other staff members talking, drinking etc and could actually enjoy the show. I’m not quite sure that was the case now.

We watched CSI, chatted all night and a few shows later we realised it was 2 am. I booted him out and said I needed some sleep.

Next day (Friday): We had an Aboriginal Health Group on site and that evening the staff participated in a Pow Wow (amazing and fun experience). There was an opportunity for us to get up and participate … dance around the circle. Sai was sitting next to me so I grab his hand and said “let’s go”. We had  a fun evening and then hung out to celebrate St. Patrick’s Day. 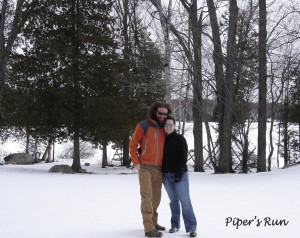 Needless to say, we hit if off and he ended up staying a little longer then expected. But back he went to Illinois as that’s where he lived and worked….with plans to return a few weeks later.  Did I mention it was a 17 hour drive for him – ONE WAY! Yeah! We dated long distance for 11 months and then got engaged.

Somehow Sai convinced me to buy him snowshoes for Christmas but little did I know he was doing the same for me. In February he moved up to Canada. The day after he arrived we went for an amazing snow shoe on the lake we lived on. It was a perfect sunny cold winter day in Ontario, one that you wouldn’t waste inside. 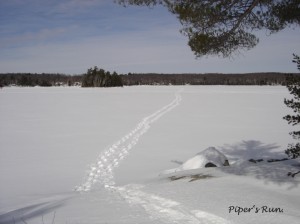 I thought it would be a perfect day to take some photo’s … little did I know, he was going to propose. 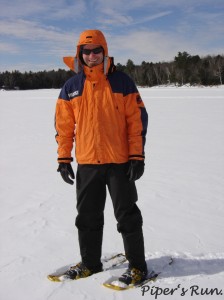 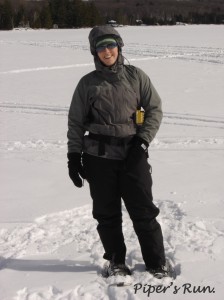 What a beautiful day.

In the middle of the lake he got down on one knee  and proposed to me! My response was “For Real?” He struggled to take the ring box from his jacket pocket and then I knew he was serious. And of course, I said Yes.

When he convinced me to buy him snow shoes for Christmas he had the whole proposal planned. 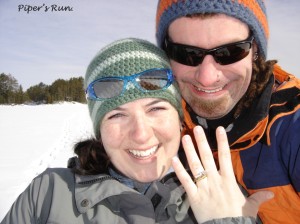 That’s how I met my life-time Valentine. 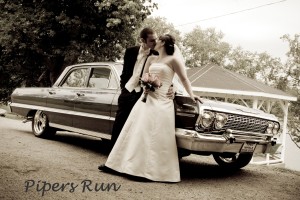 We are lucky to have a beautiful daughter who is 20 months today and have an amazing retired sled dog in our lives.

From my little valentine, Lilly: 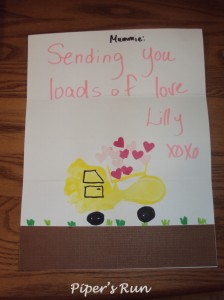 Made at Sweet and Lovely Crafts house with Auntie Laura last weekend.

What are you doing this Valentines?

How did you meet your someone special?

8 thoughts on “How I Met My Husband (Valentine)”