Last weekend, Lilly and I packed up our things and left for Prince Edward Island to spend the weekend with Saï (my hubby and Lilly’s daddy).

For those who don’t know where Prince Edward Island is:

See the small purple island – that’s it. It’s on the east coast of Canada. One of the most beautiful places in Canada (my opinion).

Maritime Provinces: PEI is the small island near New Brunswick and Nova Scotia.

Now PEI might be small but it sure is mighty and BEAUTIFUL!!! 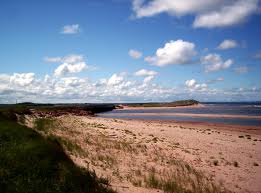 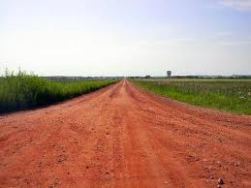 We left the Valley at 10am, after buying some local bacon to have at bunch on Sunday (a reason not to be vegan – sorry Saï). When driving for more than an hour I usually have a stash of toys and books in the front seat. That way I can pass them back to Lilly as she drops them on the floor of the car. I feel like I am perfecting this skill and she is perfecting playing with the toy or book for longer periods of time. I put Lilly’s “new to her” shoes on instead of boots because I thought she might get too hot with winter boots on for a few hours. She eventually took them off and at one point I turned around to see what she was doing …. as things were quiet …. and I found her licking the bottom of her shoe. OH MAN!!!! Strike # 1.

We made it pass Truro and hit up the Masstown Market for lunch. This place was great; local foods, a place to sit, gift store to stroll around. We walked around for a bit and Lilly was making friends every corner that she turned …. a little smile here and a wave there. I think Lilly was more interested in watching people eat their lunch rather than focusing on eating her own lunch.

We finished lunch and packed up but of course, went to the washroom to changer her nappy etc. This was your normal women’s washroom with the change table right beside the wheel chair accessible washroom – so the door kept hitting me in the back. Once Lilly was changed it was my turn to use the wash room and we went in the wheel chair accessible washroom as we could both not fit in the smaller stall. Well this was a disaster. Lilly started to look under the washroom doors – in all directions and then laid down on the dirty washroom floor. Strike #2.  I couldn’t reach her as I was mid pee – inside I was freaking out. A public washroom floor is not …. clean. So I stopped peeing and picked her up in the football hold and held her there until I was done. I don’t recommend this. Traveling on your own with a toddler was not as easy as I thought it would be, but it was so worth the trip.

You either have to take a ferry to PEI or travel on the Confederation Bridge, we took the bridge: 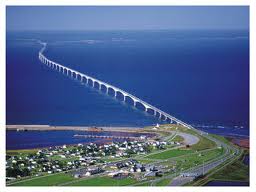 We got to PEI around 3pm and my cousin and his girl friend greeted us. Lilly and I hung out until Saï arrived home from school around 4:30.  The best part of the trip is always when Lilly “see’s” Daddy for the first time. It’s like she’s won a million dollars and it melts my heart. I heard him backing into the driveway so we went to sit on the stairs and waited for him to come in. Saï opened the door and Lilly’s arms shot up like lighting bolts – “DADDY”. To say she was excited was an understatment. Ahhh, at last, together as a family!

We decided to take it easy Saturday as PEI was getting a dump of a snow storm. We did manage to buy Lilly some new Wellies that she picked out and some groceries for dinner. Later that afternoon while Lilly slept I decided I would go for a run….in the snow storm. I’ve done it before but this wasn’t really all that fun. I got on the bike for 10 minute to warm up and then went on my run. The sidewalk had just been plowed so I thought it would be okay – not so much. Then there were parts of the sidewalk where the snow was half way up my shin, so I ran on the road. I only got splashed by a few cars and two soakers, both left foot – cold wet soggy snow puddles to blame. I arrived back after 16 minutes of running and jumped back on the bike for 10 minutes – this time I put the TV on so the time went by fast.

We took Lilly outside to play in the snow once she woke up from her nap – she was loving it! We saw a few dogs, snow banks to discover, boulders of snow to carry and puddles to splash in. See post on “10 Steps Guide to Playing in the Snow with a Toddler here.

On Sunday, Saï had made plans with a classmate, his wife and their 18 month old Lola – she was so cute. We went swimming at UPEI’s CARI facility – talk about fantastic facility for families. It was a perfect place for Lilly to go “swimming” and play in the water. We had a great time. Then we went back to his friend’s place for brunch – that’s why I brought the bacon. It was great to just hang out as a family with some of Saï’s friends and classmates. One of his friends ended up knowing a few friends of ours – such a small world after all !!!!

We usually spend Sunday afternoons skyping with Saï’s mom who is in England. It wasn’t the best call as Lilly was kinda woken up by Saï so we could make the call – Strike #3. She was cranky but after a little snack she was happy again. We didn’t last too long on the call as Lilly was starting to loose it again so we called it quits and I went to make dinner. I made the Vegan Mac and Cheese we’ve made before, you can find it here. However, Lilly wasn’t loving it so I had to put some real cheese on it.

Monday was “Islander Day” or Family Day in other Provinces, so Saï had the day off school. Nova Scotia doesn’t have Family Day – kinda sucks – so I took it as a vacation day. We had to pack up and spend another 5 hours traveling back home. Lilly was completely in love with all of her books and managed to play with them for the majority of the ride. While stopping as the Masstown Market on the way back, a college of mine from that region of the province had come for a meeting. He sat with us to have lunch …. it’s always a nice surprise when you run into someone you were not expecting to see.

Home and back to Reality.

I usually love coming home but this time not so much. I’ve mentioned this before, I much prefer life with my husband home as opposed to being a single parent. Life is just better with him.

We unpacked the car, made some dinner and back into our normal routine.

I didn’t work out, I didn’t do the dishes. I did manage to get a load of laundry on and watched mindless television for an hour.

We had a great trip to PEI and a wonderful weekend with my hubby/daddy. Three more weeks to go and Saï will be home for his on the job training.

I sure am wishing the weeks away!