Yesterday I went for my first 5k run with baby Hilary the her stroller. After doing Ripped in 30 for the last week I realised that I am in fact getting stronger. However, it wasn’t without a challenge.

I decided Monday night after my Ripped in 30 (level 1) that I would run Tuesday morning when Hilary was to nap – which could be anywhere between 8:30 and 10 am. I was really not wanting to run, especially since I did a pretty intense workout the night before. Even though both Hilary and Lilly slept well (I was only up twice) I still was dragging my feet. She started to get fussy so I got on my running gear and got her in her stroller and off we went. 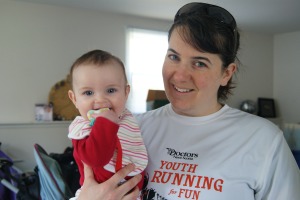 First off, it was bloody hot outside and I should have worn a tank top and shorts not t-shirt plus long sleeve on top and Capri   pants. My plan was to warm up by walking for 10 minutes and then run 5 k. After 5 minutes I got bored with walking and started running … off came the long-sleeved top which came in handy later to keep the sun off Hilary’s face.

The run out was awesome. I felt strong, I felt like I had been running for months. I was surprised at how good I felt. I guess my workouts are starting to pay off. Yeah, for “Operation Get Fit”. I had a few crosswalks to wait for and checked in on Hilary  a few times and was 1/2 way done my run before I knew it. Sweet! Or so I thought!

Oh man! I thought I was slapped across the face and my body wasn’t moving. The WIND was rather strong and with a jogging stroller I struggled as the air was catching the shade visor and keeping me from moving forward. I was felt defeated 😦 My run out was SO good and I was expecting the same on the way back.

I refocused my goal of running the whole time and did what I could do until I was out of the wind. I even managed to run half way up this steep hill to our subdivision that I’m sure the two old lady’s I passed thought I was crazy to do. I didn’t feel defeated anymore.

I finished the run and did a 5 minute cool down while walking home. Hilary was asleep and I finished my first 5 k postpartum. Now I know I can do it again and again and work towards my goal of running a 5 k under 29:16 sometime this year.

What I Ate Wednesday … thanks to Jenn at Peas and Crayons 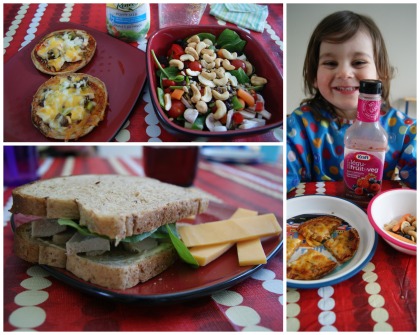 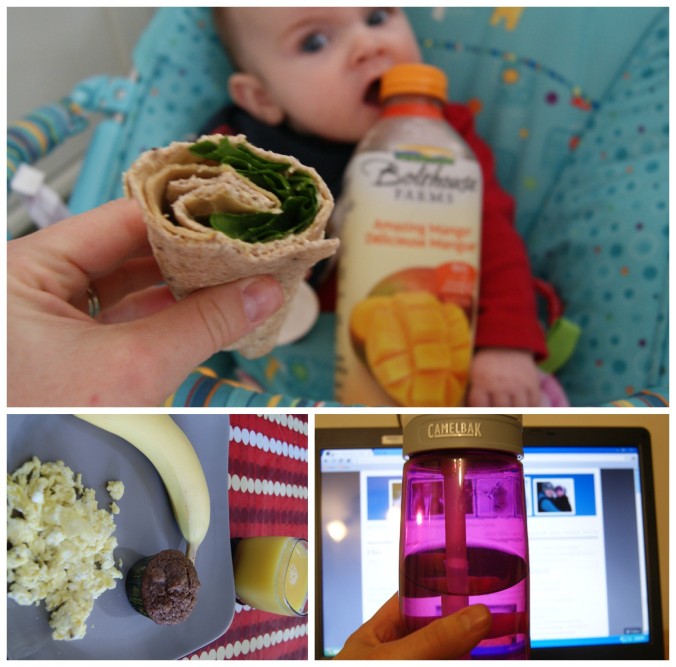 My new favourite wrap – 12 Grain Wrap, hummus, spinach and hickory smoked tofurky deli slices! (I can’t believe I like them…I ran out of sandwich meat and “borrowed” some of my husbands…new favourite!). Bolthouse Farms “Amazing Mango” smoothie – a little someone was trying to sneak a little.

Water, water and more water. I can’t get enough of this stuff!

That’s what I’ve been eating.

Did you ever have an awesome run only to feel defeated on the return?

What are you eating these days?

7 thoughts on “Running against the wind & WIAW”