Running in tutu’s has to be one of the best ideas ever! That’s what I did this past weekend with my sister-in-law and some friends….covered in coloured dye and running/walking up down cross-country ski trails. Let me tell you all about it….

After being up three times with Hilary Friday night, I got up at 6 am, prepped for the run, ate some breakfast, got on Facebook and then hit the road in +3 degrees. Brrrrr.

The drive to Ski Martock usually takes about 40 minutes but I guess I was so pumped about the run I got there in 30. When your driving to a run make sure you have some good tunes to listen too. I sure did but they were from 2005!!! Apparently, I rock out to kids tunes way more than I do my own – gotta work on that one.

After meeting my group of friends we loaded on a school bus (we felt like kids again) and off to the hill we went. Dressed in white t-shirts, white tutu’s, and colourful socks….We.Were.Ready.  Since we had our race kits we were able to head right down to the start area and party it up…and that we did.

There was lots of dancing, cheering and colour in the air.  They let 500 people “run” every five minutes starting at 9am and we were the third set to go.

Nothing like a little dance party to get you pumped for a 5k run 🙂 It was a lot of fun at the start area, lots of hype and energy.

And then we were off…it was slow going as we were at the back of the 500 pack but we slowly worked our way through people that were walking. The route was on the cross-country ski trails at Ski Martock – so very hilly, muddy and random hay in places that were really muddy. We had to walk down some hills as it was really slippery and wanted to avoid falling on our butts.

After going through the orange dye station and at the end of the 3k run.

We hit all the dye stations and got to the end and realised that it was over before we knew it. It wasn’t quiet a 5k but closer to 3k. I was a little disappointed as I had it in my head we were running the distance of 5k. Maybe they changed the course because some of the trails were too muddy and not safe or they compensated the distance because it was SO hilly…I dunno. It was still a lot of fun.

After our run we hit up the dance party/dye bubble, grabbed some water, saw a few people and got the bus back to our car around 10:30 am. There were still people waiting to leave the parking area for the run when we arrived back at our car. We later found out traffic was backed up on a number of roads and the main highway as 7,000+ people were attending the event! Well done Nova Scotia…way to represent!

This was such a fun, easy, and laid-back event and I would do it again in a heart beat. We are already planning our outfits for next year.

Driving home I was a little embarrassed as I passed cars since I still had the dye all over my head and face. I passed one car and looked over, she had it on her face too. I felt better 🙂

The girls were really happy to see me and I quickly grabbed a shower so I could play with them again. It’s been two days since the run and I still have patches of dye on my skin!

PS – Thanks Mom for babysitting the girls while I ran and Sai took his course – we couldn’t have done either without you. xo

Have you run in a Run or Dye/Colour Run?

What run have you done that has been your favourite?

Last night was the first time I played (indoor) soccer in 2 years! For a girl who grew up playing, coaching and traveling all over Nova Scotia for soccer, I still can’t believe that I took two years off. I still remember my last game of the summer season; the field, the players and that we lost.

Two years ago, I decided when Sai went back to school I would take the winter off also knowing we wanted to have another baby at some point. Well, that’s all done now, I signed up for the indoor season and played my first exhibition game last night.

How did it feel to be on the turf again? Thumbs Up, FANTASTIC ! …. as Lilly say’s.

I was actually so nervous that I had butterflies in my stomach starting late in the afternoon! Seriously, who get’s butterflies at 33 years of age going to an exhibition soccer game? I hope it’s not just me. 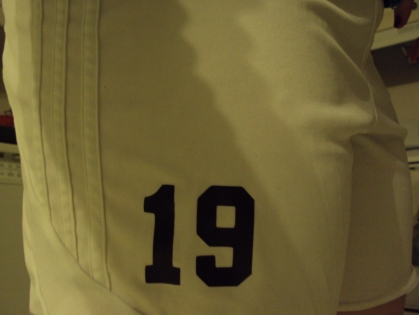 It was great to see the girls, meet a few new ones and realise my gear is still in good condition. It’s only a 60 minute game and I played 25 minutes in the first half and 20 in the second. Overall, I was pretty pleased with my fitness but man sprinting after the ball or someone on the other team sure got to me in the end. I didn’t feel too out of shape … guess my few runs and T25 is helping. Yeah for me!

Waking up this morning my knees and hips hurt but other than that I’m okay. I don’t think my body has fully recovered from having given birth 10 months ago. I had a few pains in my hips/pelvis, that I did during my pregnancy while I was playing last night. Let’s hope in time this goes away.

I’m hoping all the sprinting last night, a good T25 workout tonight and T25 stretching on Friday will get me ready for Run or Dye on Saturday. Yup, it’s white tutu wearing – paint the sky – run a 5k on cross-country ski trails time! Whoop Whoop!

I remember this play like it was yesterday. I lobbed the ball in the air down the line and my friend Tracey (left to me in white) sprinted down, crossed the ball and scored!

But, I have no idea what I am doing with my hands.

I do this when I run for some reason; thumb tucked in and fingers pointing.

Did you take a few years off from your favourite sport?

How long did it take your body to return to normal after given birth?

Do you do weird things with your hands when you run?

Have you ever seen Eat St ?

Oh man, it’s one of my favourite shows. Not only does it make me hungry for food but it makes me want to travel to these cities and eat their food!

A few weeks ago when Sai was home we went to our local Farmer’s Market with Hilary…don’t tell Lilly…she will LOSE it! Anyway, I’ve been eyeing the Orange Ukulele for months…okay, maybe even since last summer when I was pregnant with H. I never went because I thought who wants to eat a grilled cheese on a hot summer day? Well, I sure was missing out, that is, until a few weeks ago. 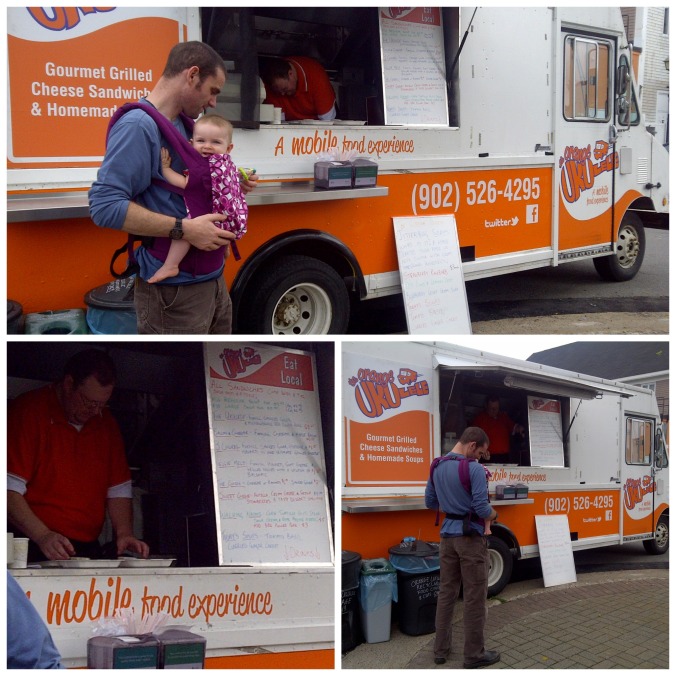 Hilary’s just loving hanging with Daddy! What I ate (since they didn’t have anything vegan): Carrot ginger curry soup was amazing! Pulled-pork with Havarti Cheese (all local foods) on whole wheat bread (second photo from the right). And a pickle (Hilary didn’t like the pickle).

I went twice; second time I got the Bacon and Cheddar Grilled Cheese )second photo from the left). It was delish and penny vegetable soup!

Other food’s I’ve been eating lately.

THE best cinnamon bun ever!

Dinner One Night for Lilly, Hilary and I.

Amazing one meal for all three of us, this doesn’t happen often – yet!

Right: {vegan} all the same but tofurky sausage instead of chicken and no cheese.

Well…the vegan one had a little cheese if you look closely. I accidentally put some one but managed to take most of it off in time! 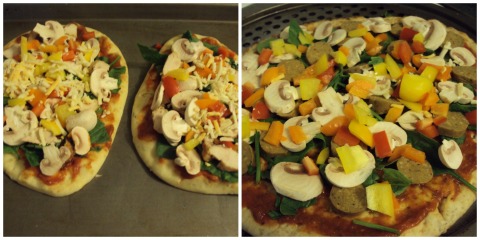 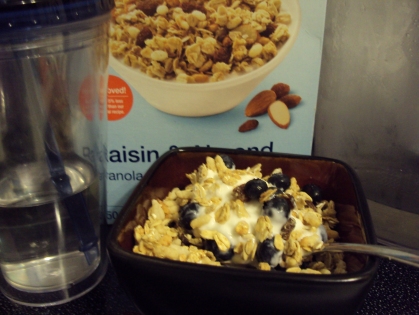 Do you go to mobile food trucks for lunch?

What’s your favourite meal of the day?

I’ve been a little MIA over the last week and here is why:

We went away for the weekend and had to prepare for leaving: getting ahead start on the laundry, a little peek-a-boo in Hilary’s new sleeping bag and crawling around on one need and one foot.

Our first stop was at the NEW Target in Halifax with the girls, Second Cup Hot Chocolate (it’s getting cold), and some new runners for me and my big girl! We both have races coming up!!! YUP, Lilly’s running her first run in a few weeks!

Then the lovely wedding of my friend Sarah.

We got home from a busy weekend and brought our dog Maclean home. She’s been vacationing in Halifax at the G’parents house. 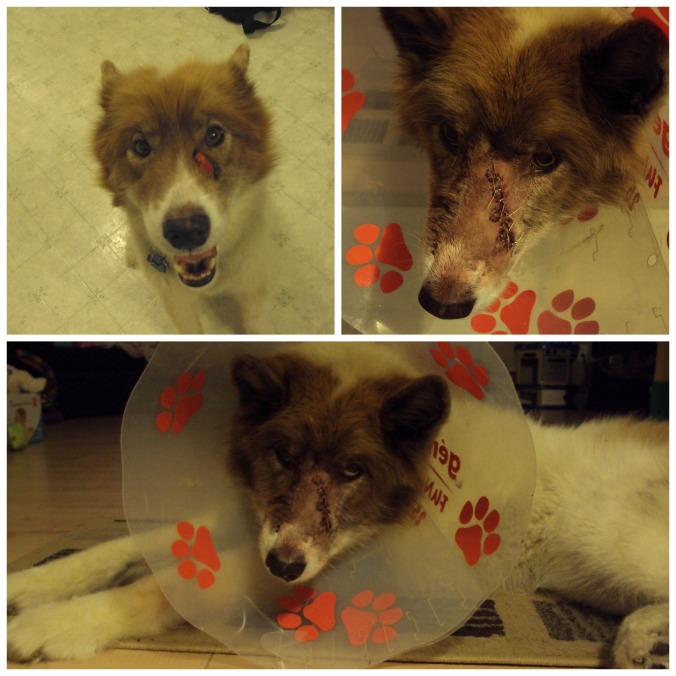 Poor Maclean has had this growth on her nose for a long time and it grew really fast over the last few months.

We booked her in at the vets and off came the sore.

She hates her cone and can’t figure out why it’s stuck on her head.

Day 2 today and she’s figuring it out and starting eating today.

Who knew when your dog goes in for surgery you worry so much.

What have you been up to?

Have you been to any weddings this fall?