Going into this weekend I had planned on going for a 5k run, sadly that did not happen. But a lot of other great stuff did!

First off we had a visit from my sister…. a.k.a. Auntie Laura. We played with every toy in our house, watched Lilly run the length of the soccer field, and we both climbed on the playground equipment and had a lot of fun. My a$$ even fit into the kiddie slide so I didn’t get stuck 🙂 We had lots of laughs.

Then three young girls about 10-12 years old, showed up in their pajama’s. Note to self: never let daughters wear pajamas as everyday clothing unless it’s pajama day at school. I figured they went to the school attached to the playground since they were very familiar with the new upgrades to the previous broken equipment. As Lilly and I were playing I heard all of a sudden ….“This slide SUCKS”!

My first thought was “oh man I hope Lilly doesn’t say that and then won’t play on it”.

My second thought was “now I understand why my Mother didn’t like us saying the word “SUCK”.

As I mentioned, I wanted to go for a long run (5k for me these days) but chatting with my sister took over once the girls were asleep and time slipped away from me.  I was pretty bummed out Sunday when I realised I should have taken the opportunity to get out of the house for a run while I could (my husband’s been away a week). Oh well, you snooze you loose.

Heading to the ECMC Craft Fair

We bought some Halloween and Thanksgiving barettes for Lilly. Then we hit up Open Farm Day (in Nova Scotia) at a local market/farm. They had lots of little games for the kiddies and best of all a bouncy castle. 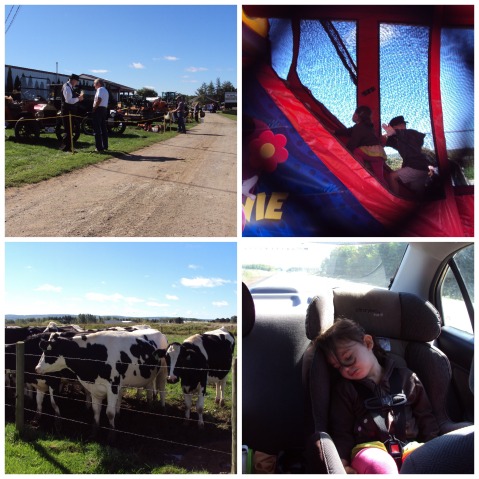 Even though I didn’t get my run in on Saturday I had a nice visit with my sister and managed T25 (day 3) workout Sunday night.

What did you do this weekend?

Do you support other mama’s creative passions?

4 thoughts on “The weekends over and I didn’t run”