On New Year’s Eve Day, at -10 celsius (14 F) I met a few friends for the Wolfville Resolution Run/Walk/Stroll. There were around 140 people who came out on such a cold afternoon! Instead of paying a registration fee you could donate money or food – all of which was being donated to the local food bank. They raised just under $700 and 300 pounds of food for our local food bank – pretty awesome! 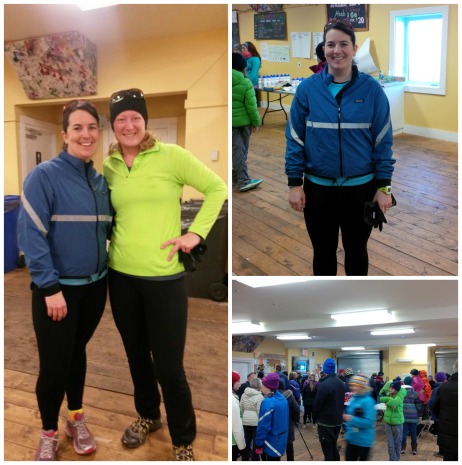 Warm inside before the run

We met and got registered inside the Farmer’s Market and got to hang out for a bit before the run started at 2pm. Everyone went outside and it started just like that….pretty relaxed and cautious as there was snow and ice under foot. For some reason I thought being one of the last to leave the building would be a great idea – really, I just wanted to stay warm longer. In the end we had to make our way through the crowd of people on ice.

Once we got through my running buddy and I kept a good pace as we slowly passed people and were cut off by kids too. The run was open to everyone which was great but it was really hard running on the sidewalk (ice and snow) with a few kids literally cutting you off. It made me think about my own girls and teaching them manners and being aware of others in their surroundings.

We decided to pick up the pace a bit and did so as we started on a little incline, again snow and ice under foot. We ran to the man who was marking the turn around point, gave him a high-five and turned around. There was two option for the run –> 3.5 k or 5k. I wasn’t 100% sure I was going to do the 5k but as we got going I was ready for it.

We made it back into the Town and then carried on with the remainder of our distance. Usually between 4-5k I start to hit a wall. Krystol and I talked the majority of the run which isn’t something I usually do since I mainly run on my own. Just around the 4k I started to get a little tired and slowed down on the conversation. I’m not sure if Krystol noticed but I was trying to just maintain the running and keep focused on the conversation with just enough in me to say a few words here and there.

We hit the next turn around point and I was really pushing it at this point but we were SO close to finishing. At one point I said that I needed to walk. We literally took 5 seconds, walked and then I was good to go. We ran to the end.

Personally, it was a great run for me. I managed to get through the last 5k and not suffer too much. I’m really enjoying running with Krystol and feel motivated to keep going with her. It was a great little event, a little snowy and icy but really, what can you expect in Nova Scotia on Dec 31st ?

We met up with our friends and had some warm apple cider – oh man, did that ever taste good. When I got in my car to go home, I ate my favourite Cliff bar (Chocolate Mint) and drank some water. I won the water bottle from Suzi a while back after she did her Nike 1/2 Marathon…I guessed her time right! The bottle is awesome.

Resolution Run 2013 done and ready for what 2014 will bring. I just need to sit down now and figure out what my running year will look like. Which races to run? Which races to think about running? And of course, how to pay for all those race entry fees 😉

Did you do a Resolution Run or New Year’s Day Run/Race?

What’s the cheapest / most expensive race you’ve ever done?