….from Running is just what I did!

A week ago Sunday, I ran in the 10k Bluenose Marathon (recap here) and really pushed myself more than I ever thought I would. It was a hard, hilly route but I managed to get a new PB/PR by 2 minutes. The next day I flew out to Toronto for a Conference…just me! I had four days on my own at the 2014 Global Summit on Physical Activity for Children in Toronto! It was the first time I’ve been away from our girls for more than one night! {crazy, eh!}.

I thought it was going to be awesome to be back in Toronto and have a little break from trying to balance it all but I totally missed my girls/hubby and thought of them all the time.

It was nice to sit for a while on the plane however my thighs were KILLING me. Every step or decline in the ground/road/steps, I would grimace in pain. Actually, I would hobble down the stairs with pain shooting through my thighs. It was brutal. Once in Toronto we missed our shuttle and decided to walk the 25 minutes to the hotel with our luggage. However it took us 35 minute because of all the people, road construction and maybe my sore legs too 😉

I knew I was going to take Monday off {day after my race} but had planned to run while at the conference with some friends.

5:45am Day 2 of Conference, I wake up and my room-mate asks if I want to run? Nope, I’m going to stay in bed. Legs still hurt and continue to hurt throughout the day 😦

6:00 Day 3 of Conference – Chose sleeping over getting up and running again. My legs are finally starting to feeling better and I no longer dread the sight of stairs.

3:45 pm Day 3 of Conference – While sitting in a session I have this idea that a run would be awesome and I felt ready to run.

6:00am Day 4 of Conference – I’m sure enjoying sleeping in 🙂 Later that day, I almost miss our flight…..3 in our group made it and three didn’t make it AND we were all together. Dam road construction and missing the ferry by 2 minutes.

Friday – Surely I’d want to run by Friday – five days after my run…and I did want to run but decided to go to bed early. Poor Hilary fell while I was away….off the bed and Grammy had to take her to the ER. She’s okay, in a soft/hard cast for a week and another x-ray to go. She was up most of the night because she couldn’t really roll over with the cast on…poor girl.

Saturday  – I really wanted to run and lace up after dinner. But, I didn’t….I watched some TV.

I clearly did not take my own blog advice: 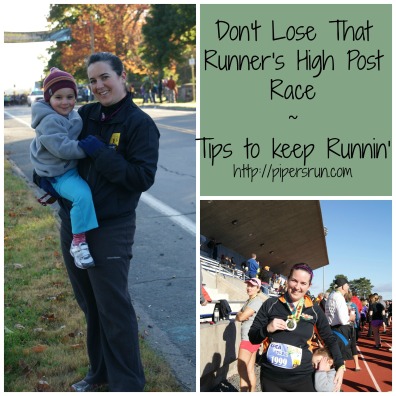 I still haven’t run yet…ha ha…but don’t worry I’m planning a return soon 🙂 I never planned on taking a FULL week off from running but those first few days I think it was necessary. Now to get back at it and start training for my next 10k at the end of June.

Oh, and I WON a pair of New Balance Running Sneakers!!!! The EPIC Canadian Run I signed up for in June sent me a little message that I won a pair – nothing like a little motivation to keep me going 🙂

How long do you take off after a race?

Ever almost miss your flight by minutes?

Anyone race this weekend? Or if you are in the US – any Memorial Day celebrations?