Hello Monday morning! I’ve got them running legs…it’s all they want to do. Run, run and more running but sometimes my mind just wants to do nothing. Another week done, another week of training for the Valley Harvest Half Marathon done 🙂 It went a little like this:

What was planned VS What REALLY happened:

Monday: Stretch & Strengthen – 7k Outside that included 8 hills. I wanted to run since I did yoga Sunday and felt that 7k was a good distance to go. I threw in a few hills….3 that were REALLY LONG inclines…you know the ones you don’t think will ever end; then a set of 4 repeats, then a flat stretch and another hill that didn’t want to end. It was hard but good at the same time. Later that night not only did my legs hurt but my lungs did too!

Tuesday: 6k Run –  6k Outside that included 3 hills (normal route). I ran my normal route and had a good 6k run. 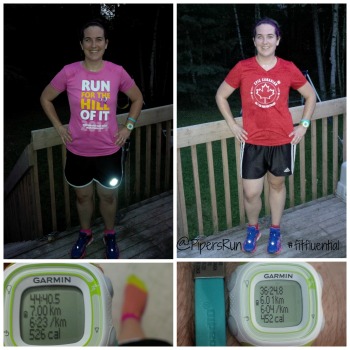 Wednesday: 35 minute tempo run –  6k Treadmill– I felt like this was a good run, nothing amazing but not terrible. It was far from a tempo run but it’s all good.

Thursday: 5k + Strength – 5k + Strength workout. My co-worker Melissa and I did a run/workout combination during our lunch break. We ran 2k, then did this workout {40 jumping jacks, 30 crunches, 20 squats, 10 push ups), then ran 1k, repeated the workout {40,30,20,10), ran 1k that included a set of stairs and walked 1k to cool down. It might not have been a solid 5k but I got the distance in and some strength workout too.

Friday: Glorious REST DAY!!!!! Much needed! Lilly had a soccer extravaganza event: bbq, bouncy castle and soccer game/skills session. We didn’t get home until 7:30, then we weeded our neighbours garden until after 8pm. I had to pack for Halifax as we were making another trip in for our car. 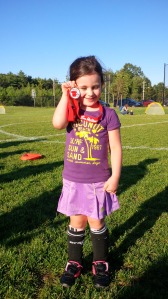 Saturday: We drove to Halifax (an hour way) to pick up my new car (it had some major work done – long story), so we spent the weekend at my parents place. Running, swimming, a birthday party, Grammy/Grandad and Auntie time along with Saï coming home!

Saturday Run:  5 k run….ran 12k. Switched my Sunday long run to Saturday. It was a great long run on a gravel trail and shade then back on the sidewalk in the sun. Fairly flat with hills at the beginning and end. I had planned on the 11k but added 1 more kilometer since I still had that distance to go before I got back to the house. Oh and I had my first GU in YEARS…like 9 years! It was “Chocolate Outrage” and I actually really liked it. I told my husband which one I had and he almost barfed in his mouth…guess he’s not a fan of chocolate gu 😉 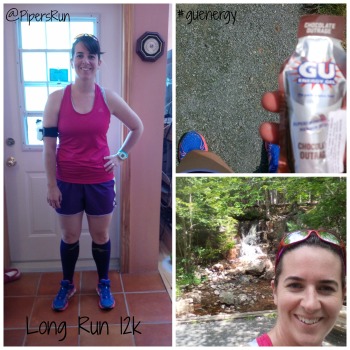 After my run, Lilly and I jumped in the pool…she learned to float like a star fish and I cooled off from my run. Later we went to a party and Hilary ate enough watermelon for an entire family of six, I swear! She also loved the bouncy castle. 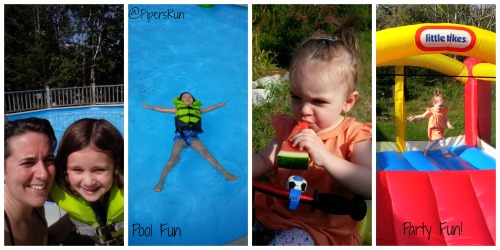 Sunday: 11k – 5k run. Since I switched my long run to Saturday I still had a 5k run to do. We drove back from my parents place, had lunch and got the girls settled into nap/quiet time. I went for a quick 5k run and it was terrible! HA! After 2 km I decided that I just wanted to run my normal route and no hard hills…just the two normal hills I have to run. I had a side stitch that didn’t want to go away and at the last-minute I ran down one of the hard hills only to run up again. I figured I’d be thankful later that I did it {I was}. 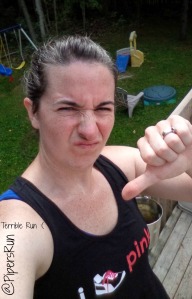 I got home to find Hilary still not asleep and Lilly want to be done with quiet time! The four of us went out to run a few errands. No nap for Hilary meant for one cranky little girl…they were both in bed my 6:30 and Saï and I passed out at 6:45 pm, I forgot how good a 2 hour nap could make you feel 🙂

And that was my running week!

Other Half Marathon Training: Training Plan, Week 1 and Week 2 and Week 3.