I feels like I haven’t run in over a week, not because I don’t want to, I do. BUT I let all the excuses get in my way. Excuses – what are those? Those are the silly little things WE MAKE UP because we really, secretly deep down don’t want to do the planned activity. We want the easy way out!

When training for my 10k’s and half marathon this past year I really didn’t let many excuses get in the way. Mainly, my excuses then were: I’m sick, I’m injured, I’m physical and completely mentally exhausted from working full-time, taking care of the girls with my husband away, running/training and managing our house. Pretty legit, right? I thought so!

Fast forward to a month post half marathon and I feel like I have every excuse in the book that keeps me from running. No, wait, those excuses are why I am avoiding running.

Bring on the excuses (a.k.a. low lazy I am being):

Excuse #1: I injured my leg in soccer last week, got a cleat to my shin and my shin pad failed me. It even hurt to have my pants brush up against my skin for days. And it is still bruised a week later.  It’s hard to tell in the picture but the bruise is actually the size of my entire hand (or the bottle of someone’s soccer cleat). My shin still hurts today if lightly rub it. 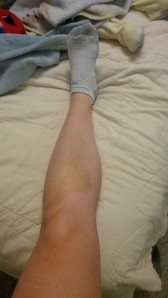 Excuse #2: Ha! You’ll laugh at this one. My husband came home!!!! Yes, it was an excuse. I left work early last Friday to get a quick run in before I had to pick up the girls. Well, Sai was home and at that point it had been 3 weeks since he was home. He was off to get his winter tires put on and I to run…..but instead we chatted for 25 minutes about everything. Why, cause it’s so much easier to have a conversation with your husband when you kids aren’t asking for a million things.

Excuse #3: It was Halloween night. Okay, it was the same night as excuse #2 but I wasn’t running in the dark while trick or treaters were outside. After getting our sugar filled girls to bed the treadmill wasn’t calling my name anymore. Meh, I wasn’t going to lose any sleep over it.

Excuse #4: We had a family day planned. I was kinda thinking about running during nap time for Hilary but Sai had to go run some errands and I didn’t want to run on the treadmill. It’s like we are in a fight…the treadmill and I, not my husband. That evening I could have run  but let’s be honest, I wanted to hang out with my husband. We ended up watching the stupidest movie ever…so stupid, I can’t remember the name of it. 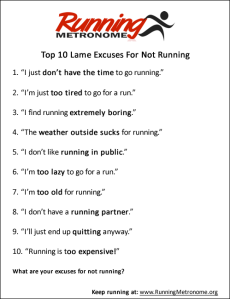 Excuse #5: I had my lazy pants on! Seriously! That’s what I told my running buddy. We talked about going for a long run as I was really missing doing that. I wrote her and said that I have my lazy pants on and was going to pass. Thank GOD she is cool like that because I was lazy. She kindly said I deserved some down time but I thought it was a lame excuse.

Okay, so that brings me to Monday, when I did this workout: A& B + Run 4k in between.

I started off with “A”; Jumping rope for THREE minutes, sit ups, squat/press and push up for one minute each. Then ran 4k and it was terrible – just terrible! After that I did “B”: jumping jacks for THREE minutes, walk out planks, bicep dips and windshield wipers for 1 minute each. OMG – jump rope for three minutes killed me at 2:06 I was almost in tears!

I don’t even want to call that 4k a run as it was that bad. *shrugs shoulders*  The day after this workout was Tuesday and my calve muscles hated me.

Excuse #6: My calve muscles hated me therefore I must rest. I did rest but I also started to de-clutter my side of the bedroom. Another excuse not to run…looks like I am on a roll.

Yes, because I’m Canadian I included this: 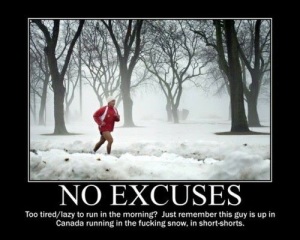 Excuse #7: Wednesday night soccer game. I was kinda dreading playing as my shin still hurts and the though of colliding with another foot, ball or body wasn’t appealing. I went anyway. It was great!

Excuse #8 – Lilly is sick with a head cold today and I am not far behind her which means Hilary will be close to follow. How many days can I use that excuse?

Are you a lazy runner, crossfitter, gym-goer right now ?

What’s the worst excuse you’ve used to get out of a workout?

What’s one thing you are looking forward to this month?

Happy Monday! Oh wait, are we really happy to see Monday’s? We had such a great weekend. It started off with the four of us trick or treating and then breakfast out Saturday morning which is something we only do every so often. The girls loved it!

The time change really messed with us but it was Daddy to the rescue at 5:15 am! I got to “sleep in/stay in bed” while he watched early morning bubble guppies with the girls then make breakfast for all of us. Best way to start our Sunday morning 😉 I was contemplating doing a long run with my running buddy but had my lazy pants on all weekend so I passed on the opportunity. I’m kinda glad as it got really cold and rainy – I’d rather stay under the covers and did so.

Lilly rocked out on the soccer field again with me while Hilary dribbled the ball with Daddy – lots of fun! No time for pictures.

Okay, Stroller Mama’s and Papa’s – this is for you! Kate over at Mom’s Little Running Buddy is host the National Stroller Running Day – Saturday November 8th 2014.

It’s been a long time since I’ve run with either girls in a stroller. Why? Well, I’ll be honest….we sold our beloved jogging stroller a while back 😦 We actually stopped using all of our strollers! Hilary just wanted to walk everywhere as did Lilly when she was younger. We sold it to these awesome grandparents that wanted to run with their grand child! I was really sad to see it go but happy it was going to a great home.

I’m pretty sure Maclean misses those runs as she could trot along with us. I miss having a jogging stroller and have been secretly looking online for a double stroller. I say secretly because I haven’t told my husband yet….guess that one’s out of the bag 😉 Maybe I should just put that on my Christmas wish list 🙂

Anyway, I may just put Hilary in our Quinny stroller Saturday and take part in #StrollerRun14. I’m sure she’d love it and Lilly could run beside us !!!

Have you ever gone stroller running?

If you don’t have a jogging stroller, would you ever consider getting one?