To give his Vega protein shake a try!

Last Saturday I planned on running my “long run” once the girls got to bed. Hilary decided she wanted to party just a little longer and didn’t fall asleep until 8:15pm which meant my run started later than I wanted.  C’est la vie!

I jumped on the treadmill and knocked out 8 kilometers. Yeah, I know, 8 might not be that much but with my injured hamstring that’s a lot for me.

My whole run I felt strong. I felt like I was running tall, you know…like I had really good posture. I was able to pick up my speed and slow down when I felt I pushed enough. I always try to run the last kilometer faster than any other, even if it’s just the last .5km and that felt great. Maybe it was my new pumps, who knows?!?!

Prior to the run I thought about making a smoothie as I bought lots of fresh fruit earlier in the day. Blueberries, raspberries, strawberries and bananas – yum. Honestly, I think that’s what motivated me to get through my run.

When I finished I message Sai and told him I finished 8k. He suggested I make a protein shake with his Vega powder. Hummmm….I dunno about that one, Sai. I really wanted my smoothie. After a solid 10 minute conversation back and forth I decided I’d go with the shake.

I’ve tried it before I really didn’t like it. Pretty much one of the only Vega products I didn’t like which was disappointing. Having said that I made a protein shake with the following:

Why did I break it up like that? Well, I ran out of chocolate milk and I didn’t want to water it down so I figured my lactose free milk would “fill it up”. With a gulp of it in my mouth, I found it wasn’t too bad! I actually liked it and couldn’t notice the flavour of the grainy-like powder. I liked it so much that I drank the WHOLE THING…600ml of protein shake! 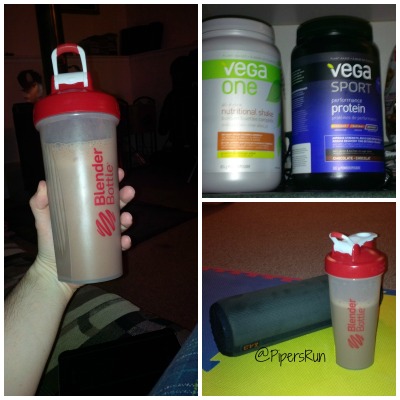 Then I proceeded to lay on the floor for a while because I was SO overfull of liquid I couldn’t move. Lesson learned…don’t make so much.

Since we are heading to the city for my Dad’s birthday this weekend, I’m hoping to hit up GoodLife Fitness and might bring along my new favourite Vega chocolate protein powder with me. I will just remember to not make so much 😉

Do you drink protein drinks after running/working out?

What’s your favourite and why?

What’s the worst one you’ve ever tried?

{Note – Not a sponsored post by Vega. I just took the Chocolate Vega Powder from my husband’s stash, Thanks Sai!}

20 thoughts on “That Time My Husband Convinced Me….”