Maritime Race Weekend {MRW} is in FOUR weeks! I’m really not sure how I feel about this and trying to figure out how I’ll get my last two long runs done without using the treadmill! They are a few weeks away but already on my mind.

What was Planned vs What Really Happened:

Tuesday – 5k – 5k Treadmill Run. I decided to push the pace on this treadmill run and it felt great. ALSO – I got released from Physiotherapy!!!

Wednesday – 8k Pace – Yoga @ Lunch & 8k Treadmill Run. My body just needed to stretch so I went to a yoga class at lunch {Hatha Renewal} and then I challenged my pace again later that night on the treadmill. Double workout day! It was a hot one and I relied on my green little fan to get me through it. 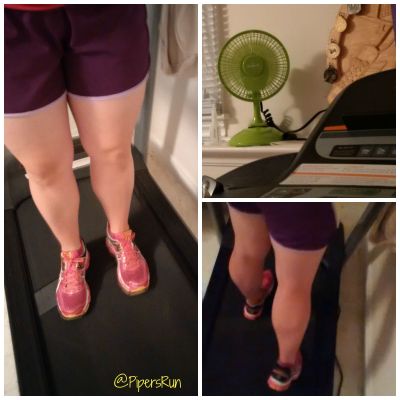 Thursday – 5k – 5k of HILLS. My husband was home which meant I could run outside so I took to the hills. I managed 8 hill repeats before trotting home and finishing off 5k. My upper arms/shoulder area was really sore and I couldn’t figure out why! I thought it might be because I’m running so much lately but no…sadly it wasn’t that. It took me a while but then I remembered I did yoga the day before and THAT’S why my arms were so sore! Benefits of cross training for ya!

Saturday – 16k Long Run – 16k Long Run. I was super excited to do this run SUPER early in the morning before hitting the road to Halifax for some family stuff.

I got up at 5:30 AM, got ready to run and managed to start running at 6:10. I was 100% colour coordinate for this run and loved all of it…ha ha. I didn’t care what anyone thought of me….even the trucker that laid on its horn twice and threw his hands up in the air twice at me.

I decided around the 3km mark that I would add in a few extra hills since the MRW course is supposed to be hilly. Well, that was a terrible idea! At 8km, I had my chocolate GU and pitched it in a garbage bin and kept running. It was a point-to-point run for me which meant those hills I did on the way out…I had to do on the way back. WHAT WAS I THINKING??????

From 11 – 16 km was just terrible. I plowed up the bigger hills pretty good but struggled on the longest ever inclines. Seriously, I even had to stop and walk. Maybe it was a mental struggle too but physically I was toast! I started calculating my finish time at my current pace and I think that just made things worse. I know I shouldn’t complain about my pace after being injured for 6 months with my hamstring but my head just doesn’t want to accept how fast my legs are moving. I was disappointed with my time – it happens.

…….and after reading a comment from another runner (Ashley) ….it made me re-think my time. It made me think how far I’ve come and be proud of what I am accomplishing with my running right now. Thanks girl 🙂

After getting to Halifax, running our errands, dropping off the girls to my parent’s place, I went and ate this burrito salad:

DELICIOUS!!!!!!!!!!!!!!!! And then we had more family time in the afternoon at my nieces baptism. So great to see my whole family!

Sunday – Cross Train – Cross Train: 7km bike ride. I just wanted a nice and easy ride but decided to challenge myself once again – seriously, what was I doing last week?!?!?!

I decided to ride on a road {HILL} and see how far I could climb up this hill. Actually, it’s a mountain {English Mountain Road}. Plus there is a fair amount of cars on this road – something I’m not comfortable with on a bike.

Anyway….off I went and up I climbed. Holy $hi!, it was super hard but I reach the point of the road I wanted to without stopping. I then road back down the road which was super fun going so fast and back into my subdivision only to go down a massive trail and back home. The girls were out biking before I left on my ride, had snack and were out again riding their bikes. We “road” together for a bit!

Overall: I feel this was my best yet challenging week yet! I pushed myself {pace wise} on my treadmill runs, running lots of hills and then finished my week off with challenging long run and bike ride.

Highlights: Seeing my whole family. Riding my bike and running 5k of hills {crazy, I know!}

Weather: It’s been a hot and muggy week in the Valley and looking like this week coming will be even worse. Running is back to hard work even at 6/7am.

Looking forward to this week: Running outside when I can….might not happen until the weekend so I’ll have to suck it up and either treadmill run or runch it out!

In case you missed week #7.

Ever look back at a run and rethink your success?

How often do you cross train?

How’s running {insert exercise of choice} going for you this summer?

Sometimes you just have to get taped up to heal (along with PT). Nothing major but dealing with some tendinitis in my rotator cuff. Not going to lie, looking forward to being pain free in a few weeks, fingers crossed🤞. Today was day one of half marathon training.....which called for stretch ✔ & strengthen ✔. We'll see how training goes! Anyone else taped up? . . . . . #halfmarathontraining #slightlyinjured #motherrunner #momswhorun #runningmom #runandbehappy #runstronger #fitbloggroup #teamtap #teamnuun #teamtiux
"Do you want go for a run, Carmacks?". Heck yes!!! He's always up for running (except in the dead of summer, of course). Not going to lie, love having a retired sled dog to run with when my motivation is low. And now he is sleeping! Ruff life. Super sunny, super cold, super day of running. I warmed up on my bike for 10 minutes before hitting the roads which are 50% ice and 50% clear/sandy. That's winter running for you. Anyone else kicking off Friday with a run? (Or something else?) . . . . #winterrunning #canadianrunner #retiredsleddog #husky #runwithCarmacks #sleddog #motherrunner #momswhorun #runningmom #runandbehappy #runstronger #fitbloggroup #teamtap #teamnuun #teamtiux #sweatpink #momlife #womenscycling #notjustarunner #halfmarathontraining #rundone