As you know, this year has had some physical challenges for me with my hamstring and they aren’t over yet. Though my hamstring is okay with all the crazy workouts I’m putting it through, it’s still not 100%. The only way to test it is to do some speed work (sprints) or hills and I’m not feeling ready to do so just yet.

I’ve given up on play soccer until January and focusing on getting stronger. Though this year wasn’t what I had planned – from wanting to run my first FULL marathon to just getting in a half late in the year, I’ve done a lot of fun things! Along with that I learned a lot…about events, about others and yes, about me too. So, I’m starting a weekly “What I have…” post for the next few weeks (we’ll see how long I can keep it up). 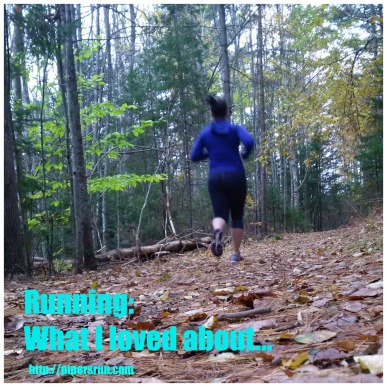 What I Loved about Volunteering at Races!

I got to volunteer a lot this year at races, again not something I had planned to do but the opportunities all just seemed to happen. I took each opportunity after forgetting about the last (not in a bad way) but each opportunity was different.

It started with December 31st last year when I volunteered at the Resolution Run. I stood out in the cold all bundled up directing runners at the turn around point. This wasn’t a big race but a fun local race that I’ve done for the past few years and a co-worker helps to organize it. Honestly, I’m hoping to run it this year 🙂

Lesson learned – Always be prepared for the weather, even as a volunteer. (I was).

In March, I had hoped to run the Hypothermic Half with my running buddy Krystol. My hamstring was the worst at this point and the stars did not align. What did align was volunteering yet again. This time it was at a water stop at the turn around point. 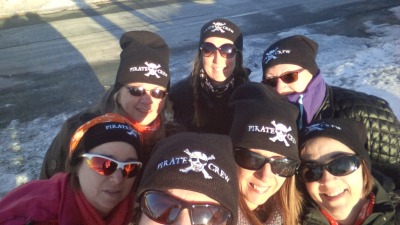 I’m smack in the front

This race was insane! Seriously, the conditions were beyond terrible as the runners ran on a trail that was literally a sheet of ice. Krystol had said I was brave for standing out in the cold….ummm, no…the runners were all brave for running in those conditions. What I loved about this race was meeting some new people from the Halifax area. One of these people, Tracey R., I would come to meet at many races and then connect on Twitter. It was also great because there was a hot brunch after the race – bonus!

Lesson learned – go outside your comfort zone and volunteer with strangers!

In May, I had planned to run the Bluenose Half Marathon in Halifax and again, I physically couldn’t do it. However this time, I wasn’t a volunteer per say but I was a spectator along the half marathon route – roughly 18 km. I had a fun sign that read “Keep Calm & Press Button for Speed”. It made a lot of runners laugh, hit the button or high-five me. I’m pretty sure I saw 97% of the half marathoners and a handful of full marathoners in the 2 hours I was standing along the route. 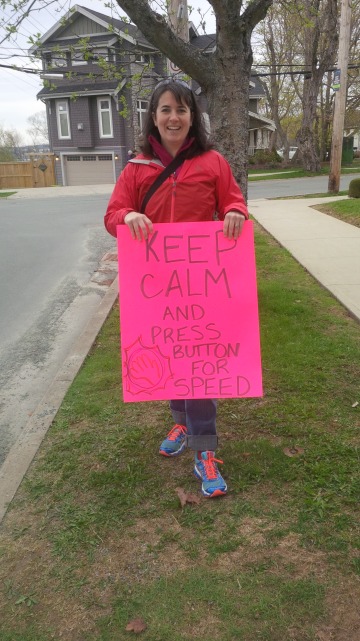 This was a completely different experience being a spectator. As some runners were struggling, my sign made them smile and some laugh out loud. I saw friends that I didn’t know were running and boosted their energy not to mention how proud I was of them.

Lesson learned – Being a spectator can motivate others when they are hitting the wall.

Next up was Maritime Race Weekend. Well shit…I was so ready to run this – mentally and physically until my hurt my foot. Honestly, I was devastated that I could barely walk on my foot and just felt crushed. My training was awesome but my body had other plans for me. After a few days of sulking, I picked myself up again (with lots of support from bloggers, readers, tweeps and friends) and committed to volunteering at the Tartan Twosome (2 races). 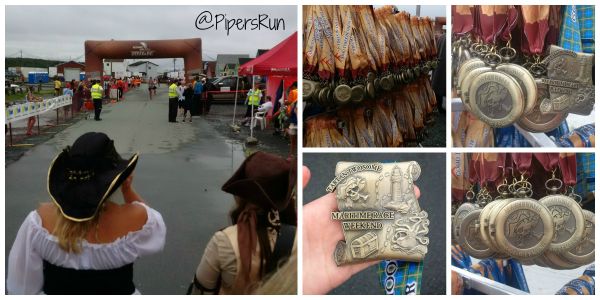 I feel thankful that the race director asked me to volunteer and I met so many amazing people! I’ve never had that many race medals in my hands at once nor did I ever realise how heavy a box of those things are! I celebrated many people’s runs, saw friends (again) that I didn’t know were running and cried with my running buddy Krystol as she finished a tough half marathon.

Lesson learned – Take the opportunity that is given to you – it can change your perspective.

Pacing the 10k {1:10 finish} at Valley Harvest Marathon was an experience that I’ll write more about. I was super nervous yet completely motivated at the same time! The pace was great, the people were awesome and the results where bang on! {1:09:59}

Lesson learned – Go out of your comfort zone – challenges can motivate you.

Though I thought this was going to be the “Year of the Full Marathon” it ended up being the “Year of Volunteering”. It was the year of new experiences, expanding my running community friends and stepping outside of my normal participant role. The only thing I would change this past year is the amount of pain I was in as that truly sucked the life out of me. I loved all the opportunities I had to volunteer.

Have you ever volunteered at a race instead of running it?

When you think about 2016, are you thinking about when you might Volunteer at a race?

What’s the best thing about a volunteer at a race?

20 thoughts on “Running: What I Loved about Volunteering.”