Just like that another year is done. I’ve been trying to decided if I should wrap up the year on the blog and finally pulled it together. This is how things went for Piper’s Run!

I started off the year by running my first kilometer with my daughter Lilly and am planning to make this a tradition. Though I was still newly injured with my hamstring, I thought I was on the mend – nope, nadda. I’m still happy my first km was with her.

We managed to get some skiing in with Lilly while Hilary hung out snowshoeing around with Grandad or Grammy. This year all four of us will be on the hill….well, we will be on the hill with a few toddler tantrums I’m sure. We are all ready to go!

My 2015 goals pretty much went out the door when my hamstring was not getting any better, though it would take me months to , I mean come to terms with this. I’ll write another post about my 2015 goals. 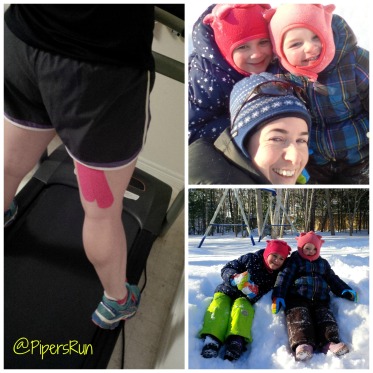 I spent a lot of February – April with my Physiotherapist, my Massage Therapist and even an Osteopath. I also spent a lot of time clearing snow from my driveway (we have seven major storms last winter that started at the end of January and went into April).

My hamstring was only slightly getting better and we got MORE snow! My Dad had a heart attack which turned life upside down but only for a little bit as he’d be back to normal pretty quickly. I ventured out at work and did some Graphic Facilitation that turned out to be a lot of fun!

I also volunteered at the Hypothermic Half Marathon – this was the most ice I’ve seen at a running event and that wasn’t for post race recovery. Lots of injuries that day (not for me).

I had my first DNS due to my hamstring injury. The pain in my hamstring wasn’t getting any better though each physio/massage appointment I thought it was…it wasn’t; I was still injured.

I started with a new {sports} physio therapist which was the best decision ever! This finally had me on the road to recovery with my hamstring. Lilly ran her 2km race at the Bluenose Marathon and I walked/ran with her.

Me and my girl

I missed another race {Bluenose Half Marathon} and wasn’t overly enthused with that. However, I decided to be a spectator along the half marathon route. I also met some RunATCan members, John Stanton and got to be a speaker at the Marathon with some other awesome runners.

My hamstring recovery was coming along slowly but moving in the right direction. I changed my running goals for the year and felt so much better even if running 5k was extremely hard to do.

I even managed to complete the 30 day plank challenge! I also started training for what would be my 3rd half marathon.

That’s A LOT of planking!

Morning runs, summer vacation and running through the sprinkler with our girls was how I spent July! I was introduced to cupping by my physiotherapist and wanted to cry. However that’s what started to really help my hamstring heal. 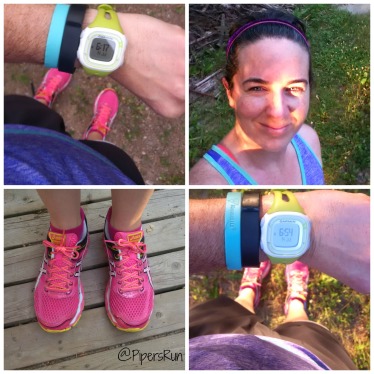 I had some beautiful training runs while on vacation with my family in PEI. We swam in the ocean, ate when we wanted to and enjoyed the sunshine!

A big step in our family: Lilly started school!!!!!! Though school was going really well, my running was falling apart. Something happened to my cuboid bone in my foot and couldn’t run my half marathon at Maritime Race Weekend. I was so frustrated because I was doing everything right only to have it all go wrong.

Luckily I was able to volunteer at Maritime Race Weekend and hand out medals. 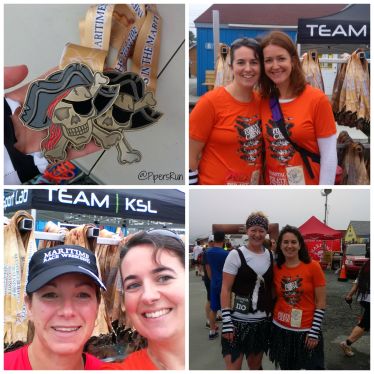 Once I got my foot sorted out AND my hamstring, I started to refocus my running on training for the PEI Half Marathon.

I became a 261 Fearless Ambassador, we celebrated Thanksgiving, the girls ran the kids run at Valley Harvest and I did my first gig at pacing a race! I paced the 10k – 1:10 finish at the Valley Harvest Marathon and LOVED it! I finished in 1:09:59! 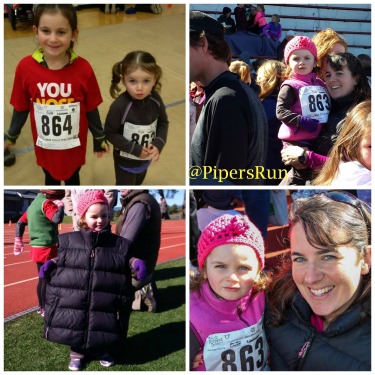 The following week I managed to finally run my 3rd half marathon at the PEI Marathon and spent four days with my husband sans the kiddies! 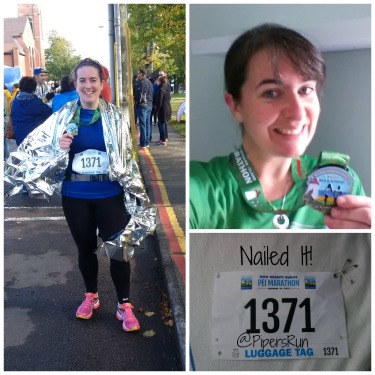 I was rocking the lunch time workouts with my co-workers and then got sick with a nasty 3 week virus that knocked me off my feet.

I did finally nailed the crow pose in yoga class – a goal of mine for the year. We celebrated our 8th wedding anniversary and I got to have some fun taking some running photos!

Oh December…you sent us on a roller coaster. We started off celebrating Hilary’s 3rd birthday and Saï’s 40th. My niece was supposed to have heart surgery on Dec 3rd but got moved to Dec 17th and she is recovering just perfect now; thanks for all your comments, thoughts and prayers. I’m so happy my brother and his wife have that day behind them.

I almost forgot I ran a Santa 5k Run with some friends – that was fun! Piper’s Run turned 4, and I became a member of Team Nuun for 2016. I finished off December by running a full marathon over six days and my hamstring didn’t complain – BIG WIN!

If you are still reading, thank you 🙂 It’s been a roller coaster of a year with running but somehow I managed to run 844 km. Crazy! So many lessons learned this past year and I’m sure hoping 2016 treats me better in the running department.

Honestly, running a marathon over the holidays was a last-minute decision. I saw the posting on the Facebook group and thought “that would be fun”. I seriously thought it would be fun but most of the runs were a struggle.

This was a terrible run outside and it was an easy out and back on fairly flat grounds. I was dressed way to warm, had a long coat on as it was raining. Took it off around 8k and felt so much better. Though it was a struggle for most of the run, I did feel great afterwards.

Another terrible run outside but got it done. It was super warm outside and I could have run in shorts and a t-shirt but I didn’t want to blind anyone with my legs 😉

This was an awesome run that almost didn’t happen. My family drove to Halifax and Saï and I planned on running together but were exhausted after getting up at 4 AM. You see, Hilary fell out of her big girl bed for the first time which had us up so early and the three of us couldn’t get back to bed.

We drove back home that night as our first winter storm was coming Sunday morning and I wanted to be off the road. On the way back Saï decided not to run as he was starting to feel horrible (man cold coming on) and I decided to not run. As we got closer to home I changed my mind again and decided to run.

The girls were already in their pj’s (smart idea for night trips) and once we got them to bed I went running. IT FELT SO GREAT! I was running fast and my legs/feet felt like good. Mission accomplished.

This was a treadmill run and I was planning for 7 km which turned into 10 km. I started to watch Scandal again and got lost in it and decided to keep running. I was dripping in sweat and my clothing was soaked. Honestly, if it wasn’t after 9 PM I probably would have kept running. Even though the man cold took over Saï, he ran earlier that day.

This was another hard run. Maybe because I ran 10k the day before, maybe not. Maybe because it was my first “snow run” of the winter. I was just happy to have it done.

I was planning on getting dropped off about 5 km from the house and running home but started to not feel well and figured I’d run the 5 on my treadmill. However, when I got home I changed my mind again and ran in the snow.

The streets and sidewalks were covered in snow but my Yax Traxs helped for the most part and I took it real slow. This run was just about finishing 5 km and finishing the last little bit of the forty-two point two.

Day 7 – I can rest…oh and shovel snow most of the day since we got 25 cm of snow last night! So glad I participated in this challenge and had my husband do it as well. Hoping to do this again next year!

Have you wrapped up all your Christmas things?

It’s hard to believe Christmas is over and done with, especially when seeing lots of “2015 recaps” and 2016 goals popping up in emails and news feeds. I’m not ready to even think about 2016 goals.

We had a great Christmas here. My husband has been home for closed to 12 days, Santa arrived, lots of food was eaten and we even logged a number of kilometers. Yes we, my husband got out for a few good runs too!

We had our first snow storm on Sunday night and getting another storm Tuesday night. Welcome to winter!

No, I don’t have any plans for a 2016 marathon…at least not yet. I’m not sure if a marathon is in my near future but I was happy to jump on board this Marathon adventure. 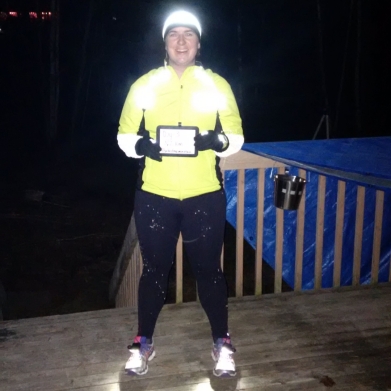 What Marathon? Well, over the Christmas break a running group {Timberlea Tundra Pounders) I belong to, put out a challenge to run the distance of a Marathon over seven days (Dec 24th -30th) as a way to keep you active over the holidays and over indulging in food.

It’s been fun to see how everyone is doing with their marathon distance when juggling Christmas, work, family time and yes the snow too! So that’s my update for now. If you celebrated Christmas, sure hope it was great!

Anyone else running a lot right now?

Ever run a Christmas Marathon? 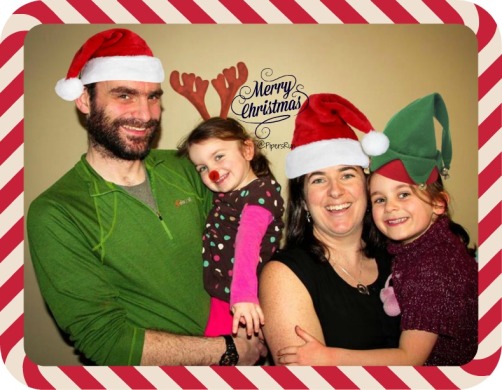