Honestly, running a marathon over the holidays was a last-minute decision. I saw the posting on the Facebook group and thought “that would be fun”. I seriously thought it would be fun but most of the runs were a struggle.

This was a terrible run outside and it was an easy out and back on fairly flat grounds. I was dressed way to warm, had a long coat on as it was raining. Took it off around 8k and felt so much better. Though it was a struggle for most of the run, I did feel great afterwards.

Another terrible run outside but got it done. It was super warm outside and I could have run in shorts and a t-shirt but I didn’t want to blind anyone with my legs 😉 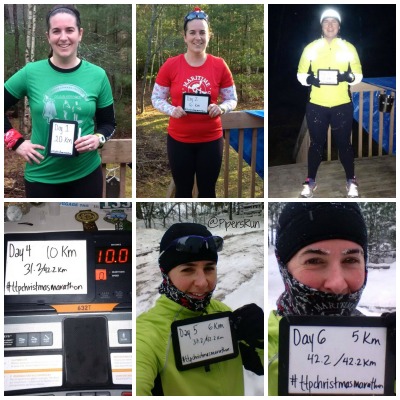 This was an awesome run that almost didn’t happen. My family drove to Halifax and Saï and I planned on running together but were exhausted after getting up at 4 AM. You see, Hilary fell out of her big girl bed for the first time which had us up so early and the three of us couldn’t get back to bed.

We drove back home that night as our first winter storm was coming Sunday morning and I wanted to be off the road. On the way back Saï decided not to run as he was starting to feel horrible (man cold coming on) and I decided to not run. As we got closer to home I changed my mind again and decided to run.

The girls were already in their pj’s (smart idea for night trips) and once we got them to bed I went running. IT FELT SO GREAT! I was running fast and my legs/feet felt like good. Mission accomplished.

This was a treadmill run and I was planning for 7 km which turned into 10 km. I started to watch Scandal again and got lost in it and decided to keep running. I was dripping in sweat and my clothing was soaked. Honestly, if it wasn’t after 9 PM I probably would have kept running. Even though the man cold took over Saï, he ran earlier that day.

This was another hard run. Maybe because I ran 10k the day before, maybe not. Maybe because it was my first “snow run” of the winter. I was just happy to have it done.

I was planning on getting dropped off about 5 km from the house and running home but started to not feel well and figured I’d run the 5 on my treadmill. However, when I got home I changed my mind again and ran in the snow.

The streets and sidewalks were covered in snow but my Yax Traxs helped for the most part and I took it real slow. This run was just about finishing 5 km and finishing the last little bit of the forty-two point two.

Day 7 – I can rest…oh and shovel snow most of the day since we got 25 cm of snow last night! So glad I participated in this challenge and had my husband do it as well. Hoping to do this again next year!

Have you wrapped up all your Christmas things?