Last week was March Break in Nova Scotia, therefore Lilly had no school. We decided to take Hilary out of day care and I would take a week’s vacation. With Saï starting his new job as a casual Paramedic, he picked up shifts as they came in which kept him really busy.

Even with it being March Break, I managed a great week of workouts. I’m still kinda baffled how I got it all in. Some days didn’t go as planned, which meant other days had to be shifted around but I had a solid week.

What was Planned v.s. What Really Happened:

Monday March 14th: Yoga | 5km Treadmill Run. I did some skipping to warm up before my run and whipped myself in the butt (literally). It really hurt and for a while that night. My run wasn’t good but I got it done.

Lilly was in a 1/2 day soccer camp Monday to Wednesday so Hilary and I got to hang out, run errands, go to the library, played at home and spent time with Saï. 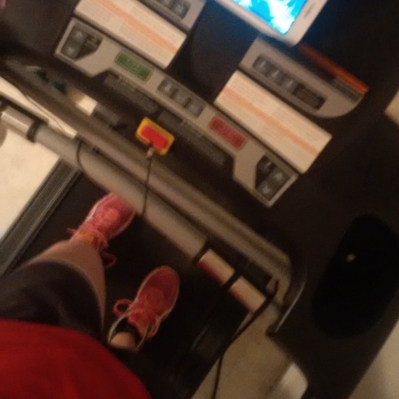 Tuesday: Yoga | Yoga. I managed to get to yoga class since my husband was home that day, however I had to rush home as he got called into work that night and needed to get a few hours sleep. (I’ll take that over him being away in PEI). Then we drove to Clay Café so the girls could paint a ceramic statue thing. THEN…we had four families (Mom’s and kids) over for a pizza party.

Wednesday: Run | Nothing. I ran out of time to run as we had to pack that evening for our ski trip AND I watched Finding Nemo in the afternoon with Hilary. Around 9:20 PM I said to my husband that I still wanted to run but that would require me to shower and stretch. It would have taken me another hour or so to do all that and I was exhausted from the day before.

He suggested I run early in the morning before we had to leave….so I went to bed.

Thursday: Ski | Ran 3k at 6:15am & Skiing. We took off at 8:30 AM and drove 2 hours to Ski Wentworth. I spent the afternoon skiing on the bunny hill with Hilary (3) and Lilly (5) got her first proper ski lesson. Within minutes she was skiing on her own!! Saï and I got in 4-5 runs thanks to my parents hanging out with the girls.

The conditions for skiing were not great but not terrible either. I had to work really hard at the bottom of the hill, slowing my speed down and carving more on icy spots. My thighs were burning on every run – felt great 🙂

Friday: Ski | Skied. We skied most of the morning on the bunny hill with Hilary. She just wanted to bomb the hill with us skiing backwards down the hill in front of her. It worked. She was loving it. 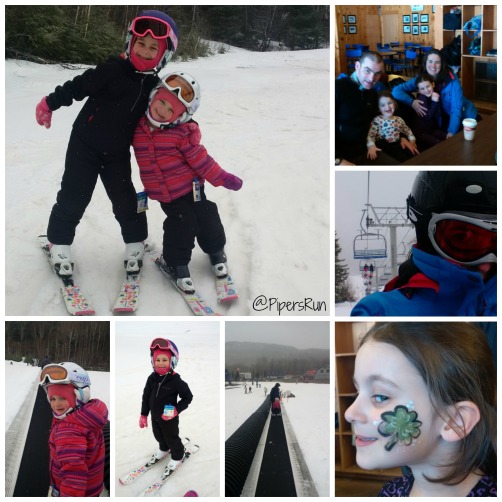 Lilly had another lesson and went to the top of the hill with the instructor. We spent the majority of our day on the bunny hill with the girls. It was FANTASTIC! Sai and I got handful of runs in.

Saturday: Nothing | Ran 5k. This was a last minute planned run as we traveled back from our ski trip to my parents house. I had an hour to squeeze in a run and managed to do that, plank, PT exercises and 10 minutes of core workouts! My lungs hated the cold weather but I sure felt great afterwards.

Sunday: Run | Ran 8k. I wanted to run between 5-7km, really hoping to get the 7k in and managed 8. I ran out of my parents subdivision which is ALL hills and I was done after that, ha ha!

Seriously, this was a HARD run. I struggled a lot and walked a number of times. As I got closer to their home and realised that I’d have to walk about .70 of a km to their house after hitting the 7k mark, I decided to keep running and get in 8k. Otherwise, I would have had to walk .70km to their house in the cold wind + being sweaty wasn’t going to be fun.

Times I ate out during March Break: Way to many to count. So sick of eating out. Or maybe I’m just sick with the portion sizes. I’m ready to get back to meal planning as well, especially now that Saï is home.

Though I struggled during all my runs this week, I’m happy with what I was able to accomplish and to be honest, that’s half the battle. I have one more week before I start my half marathon training plan but I’m moving into the same format this coming week of running vs cross training days vs rest days.

Oh – Happy Spring! We are expected to get a big storm today: 15-20 cm of snow and some freezing rain 😦 Fingers crossed it’s not too bad of a storm.

Anyone else on March Break? What did you get up to?