One of the things I love about the Bluenose Marathon is the race expo. Race info, products, prizes to be won, meeting friends and race directors. It’s that side of the running community that is motivating and inspiring. You meet people you would have never met before and then want to follow up with them on how their race went!

Last Friday, Saï and I drove into the city to pick up my (and the girls) races kits, we also hit up Costco (deadly) and went out to lunch together (bonus!).

It’s always great seeing the BEST.RACE.DIRECTOR ever! Michelle has been the race director for Maritime Race Weekend (September) for the past 5 years. I’m starting to get excited for this double race (5k & Half) but nervous about the massive hills! We also dreamed about places we’d like to run: Me – Hawaii and Saï – Nepal! 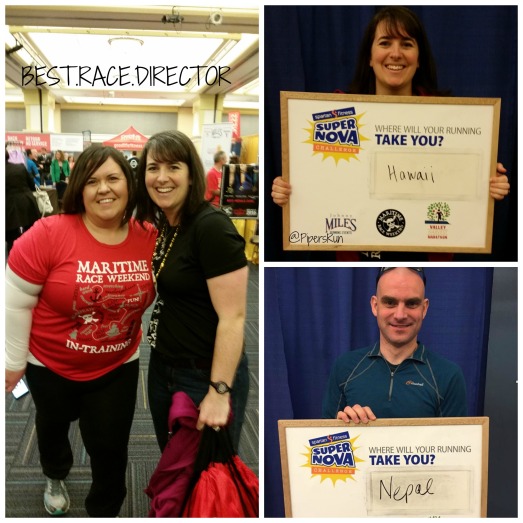 Saturday morning the kids run was supposed to start at 11 am so we made it downtown, found great parking, our friends and then walked over to the start area. It was such a HOT day, I think it got up to +24 c. Around 10:40 am an announcement was made that the race would start late but we didn’t know what time. Parents weren’t too happy about that and the poor kids where beside themselves.

In the end, it started at 11:15, so we spent a lot of time standing around in the crowd ready to go. I forgot their water bottles in the car but figured it would be okay since we were so close to start time…NOPE! Poor Hilary had a meltdown while Lilly was just so happy to be there. Thankfully, I ran into a friend that had an extra water bottle and we showered hair/next with it. Some parents were extremely upset about the late start. We tried to make the best of it.

Once we got started, Hilary didn’t want to run. Lilly had gone with her friend Teghan and Krystol, while I took Braegha with us. We caught up to them as well but there was 4,300 kids running (aged 3 months to 15 years) PLUS roughly 1 parent per child. IT.WAS.NUTS!  There was no way we’d run the whole 2 km but walk most of it because it was so crowded. Just when Hilary was feeling comfortable and started to run on her own, she felt flat on her face on the pavement. I felt so bad but she got up, cried and kept walking.

A few hours after the race, the girls loved it. Too many people may have cramped their comfort during the run but they were happy. They got some food after running and we sat on the cold floor in the Scotiabank Centre before they got tattoo’s.

I’m really hoping they make some changes to the run next year so it’s not as crazy. They delayed the start because they were still having people register and get their kit bags. I get that and amazing numbers for the youth BUT!!!!! YES, BUT….how many months did people have to sign up? And how many emails/notices when out about kit pick up????

That’s it. I hope that wasn’t too much like a rant but it’s how I feel.

The girls had a blast, we were active, we cheered on others, we were outside. It was a great morning!

Ever run with your kids in a race?

Ever have a race delayed due to registrations/kit pick up not going fast enough?

Anyone else run the kids run at Bluenose?