I really should not write the intro’s to my weekly training updates post long run! I’ll spare you the details until below about it but it was 17k and we saw 5 rabbits.

Week #9 seemed to appear out of no where, which means that I only have a few more weeks left of training before my 4th half marathon! My first goal of this race is to finish 21.1km & recover without any hamstring pain. Zero pain. But is that goal enough? Is it achievable? Is it a serious goal?

I’m looking forward to running Johnny Miles in June as I’ve heard it’s a great 2 loop course (if you like loops) and has one hill around the 8k (which you’d run twice in the half). That’s what I’ve been told but still don’t know much about the race. Going to ask some professionals (friend who have run it before). So that brings you to my week #9 of training.

What was Planned vs What Really Happened:

Monday May 23rd: Stretch & Strength | 2k + IronStrength Workout. My legs just wanted to run and I was really tempted to go outside for a long run but ended up running 2k on the treadmill followed by some strength training. Good, hard workout.

Tuesday: 8k | 8k. I had taken the day as a vacation day so I managed to get in my run early afternoon outside. It was beautiful outside but I struggled a little on this run.

Wednesday: 9 x 400’s | 4-5k walking. I was on the road early, in meetings all day and night but we did manage to get out for a half hour walk mid day and walked to our evening workshop. No running but lots of walking. 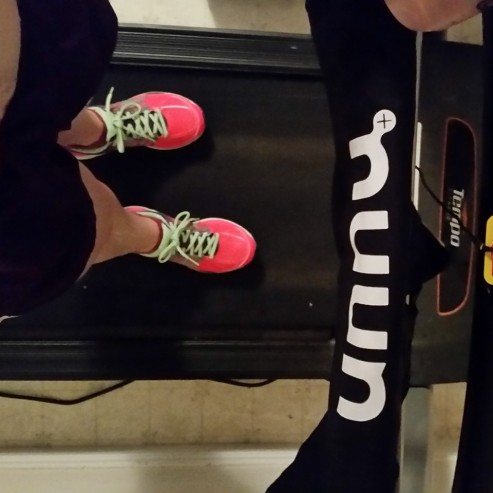 Thursday: 5k + Strength Training | 9 x 400’s on the Treadmill. This was a hard but awesome workout! I was really looking forward to this workout but slightly scared at the same time. I ran at level 9 (6:39km/hour) on my treadmill for 2k then dove right into it. I took 1-2 minutes in between each round of 400’s. This is what it looked like: 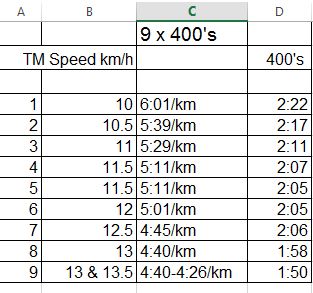 For some reason, I think I wrote down the wrong numbers for #7 as it should have been faster than #5 and #6. So that could just be my mental state error while running. Yes, I keep a piece of paper beside me and write down my time and when the 400’s start and end, then I do the math in the end of my pace with this resource.

Sunday: 17k | 17k long run. Sunday Runday! I headed out with my running buddy Krystol to North River Road – which is nothing but rolling hills. We ran out 8.7k and then returned back.

These rolling hills were massive, long and hard! The way out was pretty good and we saw 4-5 rabbits which was fun! The way back was terrible! I’m pretty sure that if it were a date, my date would have been like “I’m going home”. I had to walk far more then I ever had. Thank goodness Krystol is up for anything. 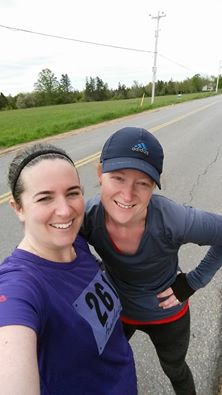 We talked a lot which probably wasn’t a good idea while running up rolling hills. Hard to breathe, talking and hills don’t mix well together. I felt like I had no energy or oomph to push through the hills, sometimes just giving up without a fight. It was by far my slowest long run in 1:57:xx! Crazy….but so good afterwards!

A nice reward was coming home to my girls and Saï. He made me breakfast and the girls stretched with me – my favourite post-long run routine.

In other news: our oldest learned to ride her bike by herself today – no training wheels! Happy Parent!!!!

Overall:.I’m pretty happy with Sunday – Thursday during week 9 but disappointed with my long run. I guess because it was such a struggle, though I knew North River Road was hard rolling hills and I still wanted to run it. I guess what doesn’t kill you makes you stronger.

If you missed last week, here it is: week 8.

Anyone race? Train? Or just relax?

What’s your favourite way to do speed work?