I was pretty convinced I wasn’t going to play soccer until this fall when the indoor (winter) season started. Honestly, I wasn’t convinced my hamstring was good to go….I was scared to get on the field and injure it again.

It took a little ( or a lot of) convincing but I decided after running Johnny Miles that if my hamstring was good, I’d play. And just like that, I’m back on the field. It’s been since December 2014 since I last played and it sure felt great.

I’ve joined a women’s 7 aside league which will be different for me as I still loved playing 11 aside. What matters is that I’m on the field and with a group of women (mom’s too) that I don’t know, except for two. It’s kinda fun not knowing most of the team as it gives me an opportunity to meet some new people. 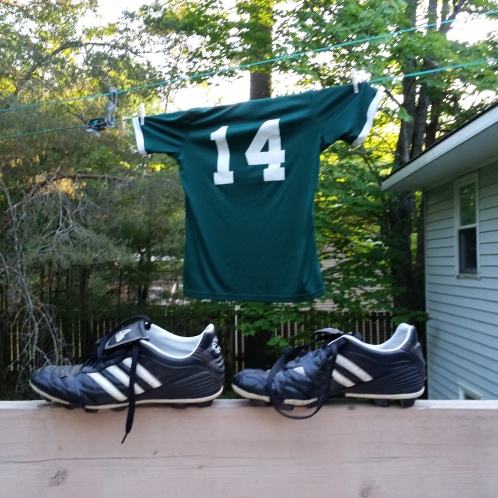 We only play 60 minute games but it goes by quickly and it’s amazing how exhausting you can get from a quick sprint and then recovering back by doing the slowest trot you could ever do. Speed work at it’s finest! Actually, thinking back to when I was 14 and was doing fartlek’s, trail runs and sprints on the field…that’s where I got started with running.

Last week, after the first game, I just hurt, all over! It felt good to be on the field but I felt odd and uncomfortable for the first 5 minutes and then I just sank back into the game. My shins hurt from my horrible cleats that were being held together by electrical tape and my upper thighs were sore from sprinting. My second game was much better and I didn’t feel odd or uncomfortable as I was able to make better decisions on the field then the previous game.

When I was on the field I got completely lost in the game. You know that feeling of completely being in the moment. I’d forgotten about my family, work stuff, stress, house/yard stuff…everything. It wasn’t until after the game that I realized I was so focused on playing. It’s been a long time since I felt that way and it was kinda nice.

There is lots of soccer games ahead of me this summer between playing once a week and coaching both girls in U4 and U6 soccer. I love it and forgot how much I missed it. Now to just figure out a training plan for what is suppose to be my next (5th) half marathon in September!

When was the last time you ran (played a sport) with people you didn’t know?

What are your summer plans?

What’s your favourite thing to do in the summer?

Happy 4th of July to my American readers! Hope you got to celebrate!