It’s race week! This Friday is the start of the Maritime Race Weekend events, with the Sunset 5k that everyone runs. Saturday is the Sunrise 5k/10k/half/full plus a pirate parade later that afternoon (kids walk).

Even though my training has come to a halt (basically), I’m still looking forward to the weekend and yes running/walking in both events. Maritime Race Weekend is such a great event and SO much energy has gone into it…I’m not just talking all those weeks the runners have been training. The race director and her team, pour hours into this weekend year round. I’m excited to see old and new friends, watch my husband run his half and just be in a positive environment, especially since I’m a little bummed about not running my half.

Well, it was supposed to be my fourth half marathon and I questioned it from the beginning (which I’m regretting now). Anyway…as my long runs increase I got more excited about completing the half only to come down with another injury playing soccer. That’s life, right! You make decisions and you have to live with the outcomes even IF YOU DON’T LIKE THEM. I am now fine with what I will be running this weekend but don’t worry MRW half marathon…you are still on my list.

What was Planned VS What Really Happened:

Monday September 5th: Rest Day | 9k Bike Ride. I got up early to get out for a short bike ride before the girls and I went to the city to spend the day with my family, Saï had to work. Other then being chased by a dog, the ride was great.

Tuesday: Yoga | Missed yoga. I was in a meeting with my boss and it didn’t finish until 12:10 and yoga starts at 12…bummer 😦

Wednesday: 8k | Rest Day. Was thinking about running but folded too much laundry and lost my motivation.

Thursday: Hills | Rest Day. I was actually planning to run on my treadmill and even bought more tape for my ankle but it was like a switch went off and my motivation disappeared. I was still just bummed out that I’m not running.

Saturday: 16k Run | 45 minute walk + Ran 5k. The girls and I went for a walk/run/bike ride  on our local trail. Hilary had a tantrum within the first 30 seconds so she decided to run/skip and walk while Lilly biked the whole time. The did a little off-road or off-trail riding/running while I stayed put on the crusher dust. Mama doesn’t need to roll her messed up ankle again!

Ummm…what, you ran? Yup, you read that right. I gave up on the “no running” rule and went out for a run. I taped my ankle and off I went. The first kilometre I was unsure about it but just felt like I needed to settle into the tape support. Around 1.5k in, I wasn’t sure if my ankle was sore or it it was me working through the tape so I walked for a bit. Just as I was about to turn home I started running again and everything felt really good. So, I ran and ran and ran until I got home, finishing 5k.

It felt so nice to run again. My lungs didn’t die and I wanted to run faster but didn’t think pushing the pace was smart. There were so many kids outside playing. I ran by one group playing “kick the can” and was so tempted to kick it and keep running but I didn’t. Could you imagine if I did that!!!!

I managed to run 6:45/km (starting off) and finished with 6:14/km and 6:07/km. The pace just felt right. With my injury and not having run in three weeks, I was surprised about my pace. My ankle felt good that evening and slightly sore the next morning. I am finding I need support so I wear my burks non-stop and the pain goes away. Basically, I live in my burks right now. 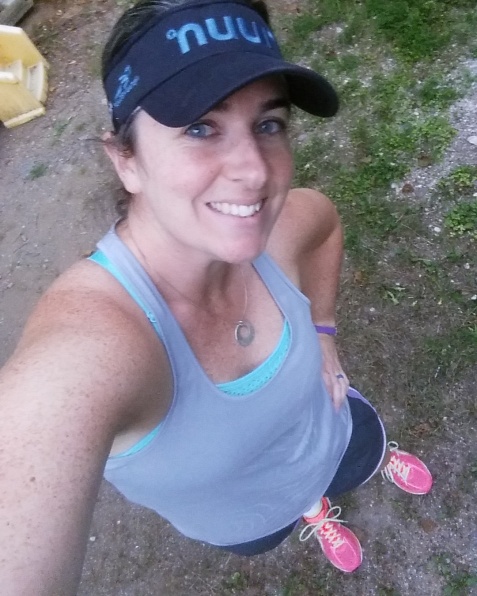 KM this training cycle: 137 km running and no more planned before race day.

Overall: I’m so happy I got out on my bike a few times, it gave me a little rush of working out again and working your body hard. Also, I’m pretty happy with my 5k run.

What now? I was going to wait until Thursday to decided on my distance for Saturday but decided after my 5k run that I should only run/walk the 5k/5k not 5k/10k. I’m thinking a double race of two 5k races will be enough on my ankle. Also I’m still holding out I can get in on a cancellation this week but if I don’t it’s not the end of the world. I do have an appointment Sept 21st, so that day is getting closer.

Did you feel like you were wrapping up summer this weekend?