One of the fun parts about Maritime Race Weekend is that you can run two races if you want to and it’s called the “Tartan Twosome”. You get a medal for each run plus one more medal for completing the Tartan Twosome duo!

If you missed my Sunset 5k recap check it out here. That was the Friday night run and this is about Saturday morning’s Sunrise 5k, which was supposed to be my half marathon. Though I was really wanting to run the half I’m so glad I made the decision to change over to the 5k.

Saï and I got up at 5:30 AM and left the house around 6:20. The race started at 8 am but we wanted to get there before 7am to get a decent parking spot which was about 1km away from the start area. It was cool enough to need a long sleeved shirt and I even saw some people with gloves on! We hit up the porta-potties cause you never know on race day, right! Then made our way to the start and waited for the crowd to fill in.

Eventually, Krystol met up with us. Somehow she always finds me in the start area in time for a selfie and good luck wishes. Both her and Saï were running the half and thought they’d probably run together. 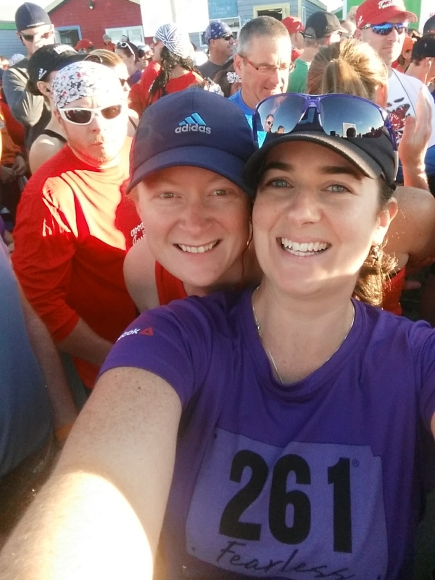 As the gun went off to start the race, I wished them both good luck and that I’d see them later on. My ankle was a little stiff but after the Sunset 5k the night before, I was expecting it. This run would be an easy run, take in the scenery and just be present. I quickly lost Saï and Krystol and just tried to focus on a comfortable pace for my ankle.

A house was blasting Michael Jackson from their home stereo, the small waves were crashing on the rocks, lots of chatter and excitement between runners and the most beautiful view you’d want to see at 8am on a Saturday morning was off to our right. Kilometre 1 hit, 6:35 and I thought, perfect…just where I need to be. As I kept running my ankle loosened up a bit and it felt good.

Kilometre two hit, 6:10…apparently I picked up my pace a little. At the 2.5km mark, all the 10k runners, half and full marathoners kept running straight while we turned around and headed back to the start. There was a massive sea of red shirts on my right and the ocean on my left. I took a number of glances to the ocean as the sun was just hitting it right. If I wasn’t running a race, I would have stopped to really admire the view but instead I just glanced back three or four times.

Kilometre 3 hit and I saw 6:07. Part of me got a little excited and though maybe I could run a negative split! However, reality of no training for four weeks hit and I had to slow down and take a short walking break at a water station. I was back at it as kilometre 4 hit and 6:22 came across my Garmin. Dang…no negative split but hey I’m running pain free – win win win!

I started to pick up my pace again and my last kilometre was 6:01. I crossed the finish line with a smile on my face in 32:18. No complaints, no regrets, nothing but happiness. It was the run that I needed. 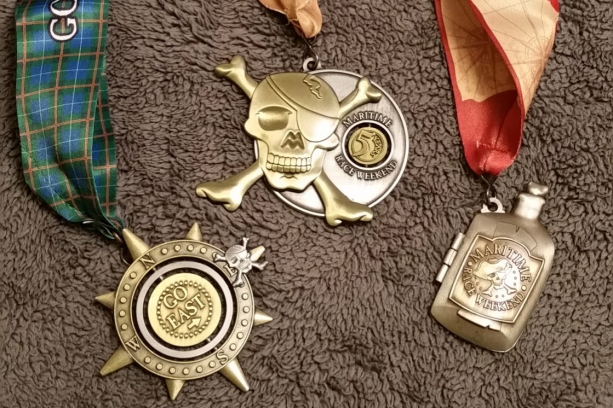 After I finished I managed to find a number of RunATCan {Running Atlantic Canada} folks and hung out with them for a while. I used the foam rolling station *loved this* and ate an amazing bagel. I saw family friends and spent a short time with them, then found Krystol’s husband Casey and kids.

We waiting on the side of the road for them to finish and I saw Saï coming in the distance and jumped up to take some photos. Casey took some great shots of us running! 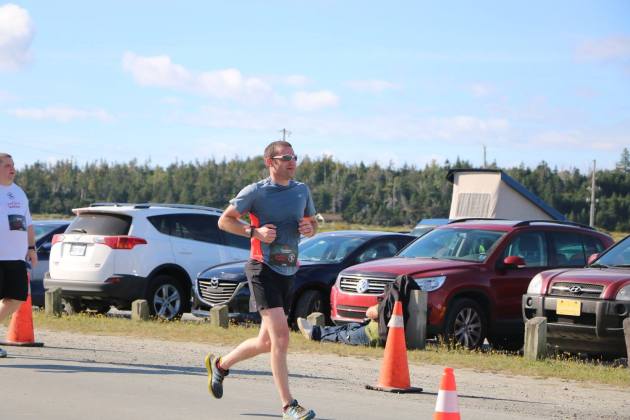 It was then that I had tears in my eyes. I was so proud of him. He was looking so comfortable, like he was out for an easy Sunday shuffle and gliding across the pavement with ease. I knew he was going to finish under two hours as we smiled at each other and high-fived as tears fell down my face. I was truly excited for him. However, it was the first time that I was really sad that I didn’t get to run my half marathon. I honestly had the half distance out of my head and was so focus on getting through 5k that it kinda just hit me. By the time he finished and came out to the road for us to see Krystol finish, I was all done with my pity party.

Saï finished in 1:54:45 and Krystol in 2:03:xx. We all had great runs, loved the views and just had a great weekend of running. Maritime Race Weekend is such a great event and we didn’t even take in all the events; race-kit pick up, fireworks, temptation station on the half route (candies and Adirondack chairs to take in the amazing view), a Captain’s bell you can ring if you PB and the kids parade to name a few. We did go to the candy shop and bought our girls some treats…which I may or may not have taste tested. 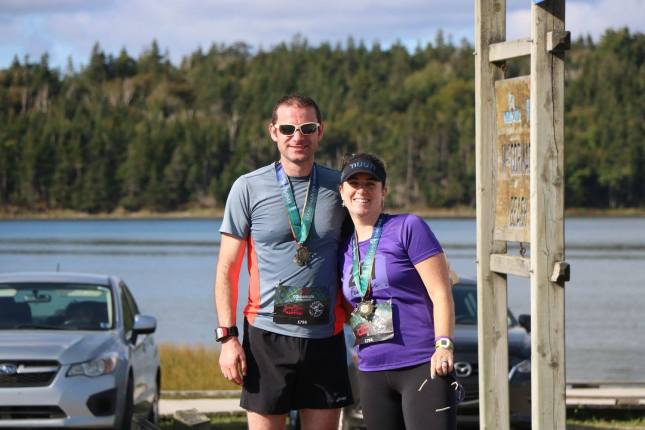 I had some issues post run with my chip time not showing up in the stats which didn’t really bother me until I had three people tell me I wasn’t in the stats. I contacted Atlantic Chip timing and they shorted it out quickly. They were so easy to work with..

My ankle held up amazingly! No pain, no aches, no problems. It feels stronger but I know it’s not close to being better. The good news is that I see my PT tomorrow!!!!!!!!

Post race, what do you do right away? Water, food, stretch?

And yes, I’m signing up for the half marathon next year!

Ever done a double race?