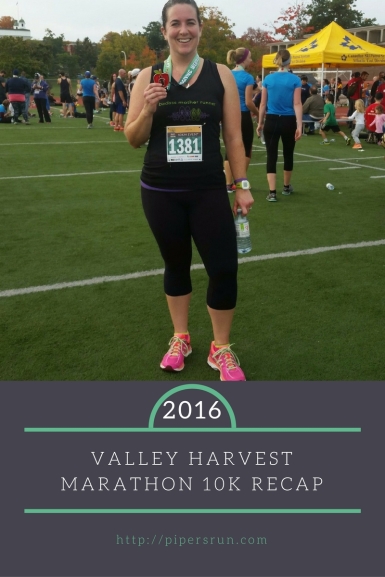 Sunday morning I got up at 5:30 otherwise known as stupid-early o’clock and left the house at 6:28am. Acadia University is only a 15 minutes for me on a good day and I had no problems with traffic or road construction. I ran into some friends, hit up the washroom one last time and met up with Krystol who was running her 10th half marathon! I really miss running the long distances right now so I tried not to think about what distance I was doing. At 7:45 the half marathoners took off and then us at 8 am. 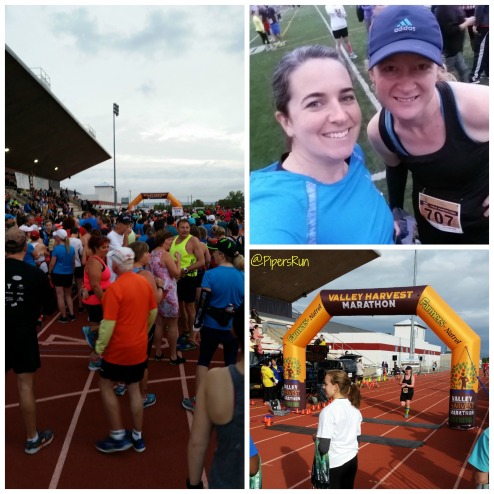 Before the race, I got to meet some  people from Instagram {teamaldred, fit_pedagogue and newshell73), some during the run as they passed by and then after as well. It’s always nice to put a real personality to a face from IG/Twitter and having a conversations beyond 140 characters or “heart likes”.

I stood by Matthew, the 1:05 pace bunny from White Rabbit Pacing. They are awesome and I felt a little disappointed in myself that I wasn’t pacing this race again. It was on my list of things to do this year but being injured and having an unreliable pace, I couldn’t commit. It wouldn’t be fair to the runners if I couldn’t keep up the pace. I didn’t see the 1:10 pace bunny so decided while waiting for the gun to go off, that I’d keep with the 1:05 (6:30/km) pace bunny however that didn’t last long.

My main goal was to run a steady race and don’t give up. Obviously, I know I could do the distance but with little training and motivation lately, my confidence was rather low. My Green Garmin beeped at the 1k mark 6:24…not bad. Comfortable. My stiff ankle was to be expected and that feeling went away after the first k. I hadn’t gone out too fast, as I have before at the beginning of a race. I was just where I wanted to be. 🙂

I was keeping my pace relativity consistent and had the 1:05 pace bunny behind me somewhere. I kept looking forward as I didn’t want to know how close I was with him. Then kilometre two hit: 6:16 – that felt nice even with the hills where people passed me right and left. My goal wasn’t to be fast, it was to race smart and steady…forget about everyone else passing you. Sometimes that’s hard to do!

As kilometre three hit we neared a long downhill where I tried to just glide down it easily. I grabbed some water took a sip and put the rest on my head and neck as the humidity was starting to increase a bit. The first place male was approaching us FAST and I was amazed by his speed. I then saw the first female! The next little stretch was flat so I picked up my pace a little more during kilometres four and five {see below}.

I felt really good but knew I still had another 4k to go and didn’t want to push it too early. I hit the turn around spot and took a short walking break and was back at it.  Sometimes I find this long stretch of road very daunting and was trying to focus on other people running in the other direction.Occasionally I would find someone to catch up to and pick them off one by one – I’ve never done that before.

I saw Kendra who was running fast shout “stay strong”.  After the straight stretched we approached another hill, near the Irving station (for those that now the area). I slowly moved up the hill passing people walking and heard a women saying “great job, looking strong pushing up the hill” which gave me a little boost. I then had to stop at the top of the hill to catch my breath. I conquered the hill but knew my limits and took a good walking break which is reflected in kilometre seven {6:46}.

As I approached 8k, running downhill then up another my fitness level or lack of started to show. Taking 6-7 weeks off consistent running really takes a told on your body. Though I was active by cycling, yoga and swimming it wasn’t enough to keep me in running shape. This is when I just kept thinking “one foot in front of the other” with a few brief walking breaks. This was a rough patch.

I had nothing left but a long incline with lots of people watching everyone finish. As I approached Raymond field (track), I was just done. That last little incline or what felt like a long incline took the last bit of energy out of me. As the group of people bottle-necked the entrance to the track, I took short steps and slowed down enough to catch my breath again. It felt relieving. As I ran on the soft track underneath my feet my body felt happy and I was able to pick up my pace. It felt nice finishing strong around the track and turning off my Green Garmin at 1:03:59. Not a PB but such a great run for me right now. I couldn’t have asked for a better run/race and time. Though I’m still a good 8-9 minutes off a PB, it felt great.

My ankle felt great post run which was also a key piece to this run. The Physiotherapy and exercises are working. I saw lots of friends and chatted with them before I realised Krystol would soon be finishin. I decided to walk the track backwards so I wouldn’t miss her and saw her approaching the finish with the clock ticking 1:59:xx ….she made it under 2 hours! I was a little concerned for her as she came across the finish line not looking great so I immediately got her attention and met up at the end of the chute. She was 2 seconds off a PB and has been dealing with Achilles pain for a month now.

Another great run/race done! No regrets, no complaints, no “what ifs”. I ran into more people who successfully grained new PB’s which is always awesome. Thank you Valley Harvest Marathon committee for a great event, it’s greatly appreciated. And thank you to all the awesome pace bunnies from White Rabbit Pacing.

That was a long post…thanks for sticking around. After my run, we drove to the city for Thanksgiving dinner with my family and had such a great visit and I ate all the food!

I think that is my last official race of the year! I’m hoping to run a Santa Shuffle in December but that’s it for big races. My head is spinning for next year but I need to focus on my PT and some good cross training to avoid injuries next year.

Do you use pace bunnies?

Canadians – how was your thanksgiving weekend?

Have any holiday races planned in the coming months?