Well, my year of running in 2016 is summed up in a few races out of a handful that I did last year. I had a rough year with three different injuries (2 minor and 1 major) so running was a roller coaster of good and bad.

I wanted to share with you some of my best running of 2016, especially for those newer followers to Piper’s Run. Last year’s recap can be found here: 2015.

Best Race Experience: Maritime Race Weekend was simply the best. The weather was perfect, the hype was awesome and the atmosphere both days was energetic and motivating. Though I went into MRW with a fresh ankle injury and dropped down from the half to the 5k race, I had a blast.

Best run:  Back in August was my last long run during training and it was my favourite! It was week six of training for MRW and I ran it early in the morning from my parents house. I paced myself well, saw many runners on the trail, ran out of Nuun, stopped at a grocery store to refuel and even managed to pick up my pace for the last 2 km. It was just great…then I injured my ankle at soccer the following week….whomp, whomp!

Best new piece of running gear: It’s not necessarily “running gear” but I love my Qalo rings. My husband and I both got two rings each. He wears his all the time and I wear mine when  I run/workout. They are silicone rings that move with your finger if you are picking up weights (or other objects) and won’t catch on anything like a stretcher (my husband is a Paramedic).

Best running advice you’ve received this year: Best to not run and take time to heal.

Most inspirational runner: I was pretty excited to see Kyla from Early Bird Runner, run her first Boston Marathon. She trained well and finished solid. I also got to meet her last year when she was visiting home visiting family which was fun.

Favorite picture from a run or race this year: Maritime Race Weekend 5k. After a disappointing soccer injury, I was just happy to be running.

Race experience you would repeat in a heartbeat: I’ve already registered for Maritime Race Weekend 5k & Half Marathon (Tartan Twosome) for next September.

Worst Running Moment & Favourite Medal: Johnny Miles Half Marathon. This is only for personal reason, the event itself was wonderful and I want to do it again. This was my goal race.

It was to be my comeback race from my hamstring injury from the previous year. It was a weekend away with my running buddy. However, it was such a struggle – mentally and physically. Looking back, even though I felt I failed myself miserably, I ran at a time when I was grieving the lost of our dog. This might sound silly to some but I was more devastated about MacLean’s death the I ever thought I would be. It happened suddenly on Friday morning and I ran the half on Sunday morning. 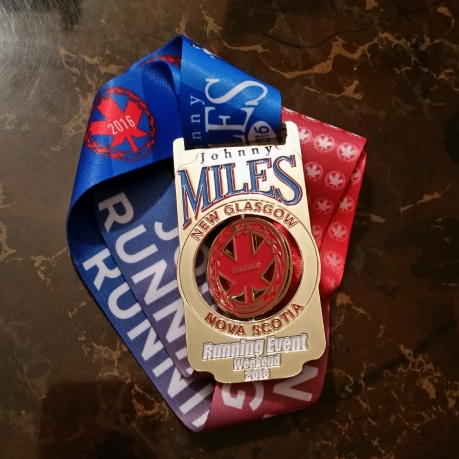 It was extremely hot (that’s fine) but I struggled through every single step. I wanted to give up after 5k and quit but I kept running….and walked a lot. I almost ran a personal worst and I STILL don’t know my exact finish time. I cried at the finish. It was rough.

It’s taken a few months but I can say now that I am proud this finish and love this medal. Definitely, my favourite medal for 2016.

If you could sum up your year in a couple of words what would they be? Disappointing, challenging and determined.

The “Year of Running”is hosted by Courtney from Eat Pray Run.

Who is your most inspirational runner?