I had planned on posted this early in the morning but didn’t have a chance to come back and finish it so…it’s now done. December was a month of getting back on my feet, back into physiotherapy for my back and hip, enjoying winter running and of course, lots of family time over the holidays! I had some specific goals for December and manged to accomplish …. all of them! 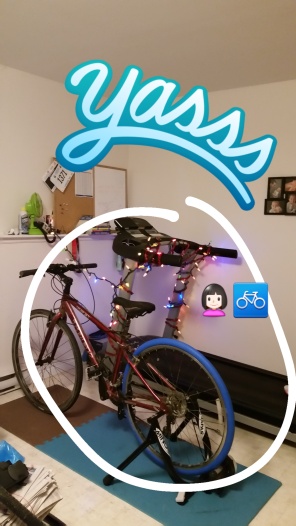 A few extra accomplishments this month: I became a 2018 Tiux & Nuun ambassador again!!! Pretty excited about being part of these programs again! This is the first month I managed to do all my monthly goals! As for my running mileage, I managed a few great snowy trail runs with Carmacks and a few treadmill runs. 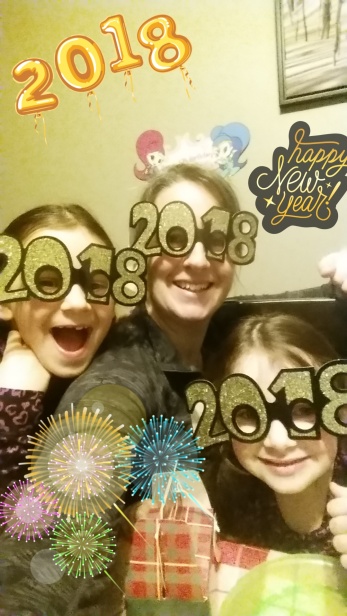 I’ll be wrapping up my full mileage from 2017 in the New Year as I haven’t had time to put together that lengthy post. All of the goals I set in December were things I wanted to do and made time to do…some at the very last minute. Looking back, though it was stressful it was a great month.

Did you set and achieve any goals in December?

Was December a busy month for you?

How are you celebrating New Years?

I sort of took an unplanned hiatus over the holidays with great intentions of blogging but I didn’t bother once to turn on my computer….it was kinda nice. However, now I’m left with half finished blog posts and forgotten posts as well.

This is my last installment of “Runfessions” for the year and I think I’ll continue next year.

I runfess that I really enjoyed my unplanned break from blogging. You know, blogging takes time and thought. I don’t write many “try this….” posts anymore or “tips for running” lately. It’s been more about my running experiences. I just didn’t make time for blogging because let’s be honest bloggers – you have to make time to blog.

I runfess that I’m really loving snowy trail running with my dog Carmacks. We’ve been out a handful of times over the last two weeks and loving it. We did have a wind storm the other day that knocked down some trees on a trail we run so I’ve had to teach him (lift him over) how to climb over fallen down trees. 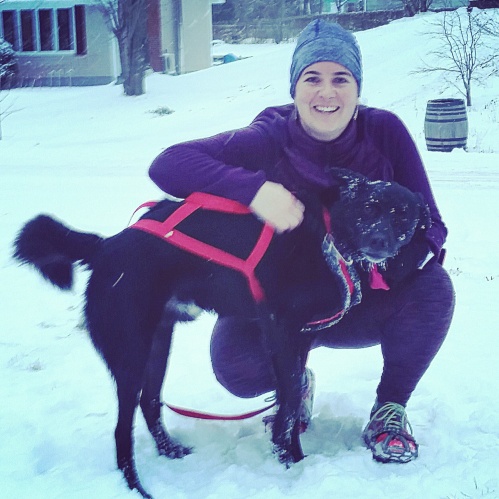 I runfess that I’ve been running with “Christmas tree” earrings for the last few weeks. Apparently, I’ve been forgetting they are on my ears and have been sleeping in them too! See photo above for my dangling earrings!

I runfess that I haven’t looked at my running mileage in three months! Normally, I’d tally it all up at the end of the month but I had no clue where I was until this morning. I’m just around 530km for the year – the lowest I’ve ever been! Oh well!

I runfess that I’m getting excited for a spring half marathon with some mama-friends. It’s a race I’ve done before but not this course so it should be fun!!!! Also, I may have encourage them to run the half instead of the 10k – such a bad mama-running friend!

I runfess that I’m happy to see 2017 wrap up and looking forward to 2018. I have zero goals for 2018 at the moment but I always take the first week of January to sort them out, then you’ll see a post on that.

How was your December?

Anything to runfess this month?

You can check out my other Runfession posts: November, October,  September, August, July, June, May, April, March, February, and January.

I’m linking up with Marcia for today’s Runfessions post. It’s hosted on the last Friday of each month. 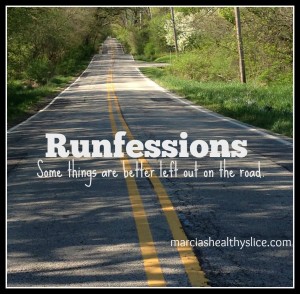 Sometimes it’s hard to look back on the year and see all the things you’ve done (or missed out on). Running for me has always been something fun to do, a stress reliever, time to myself, an opportunity to be a better mom/wife and also to take care of my physical and mental health. This year sure gave me a challenge with my running.

For the last few year’s I’ve been doing the “Year of Running” wrap up hosted by Courtney at “Eat Pray Run DC”.  Therefore, I’m doing it again!

Best Race Experience: Pacing the 10k at Valley Harvest Marathon  with White Rabbit Pacing was my best race experience. I ran with two Garmin’s this time pacing just to make sure I was on pace.  It’s such a fun local run and  so rewarding when you bring runners to the finish line on time! 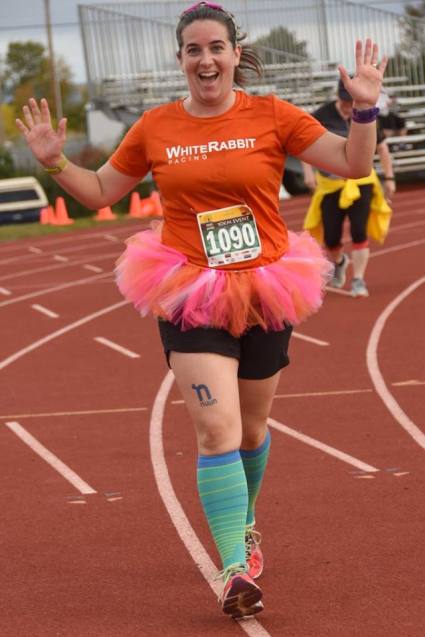 Best run: Running Cape Split with my husband in September. We don’t get to run together often but when we do it’s awesome. I love that he loves to run (and cycle etc.) but when you can go for 1-2 hour run with your husband it just makes it that much better. Best run hands down of the year. 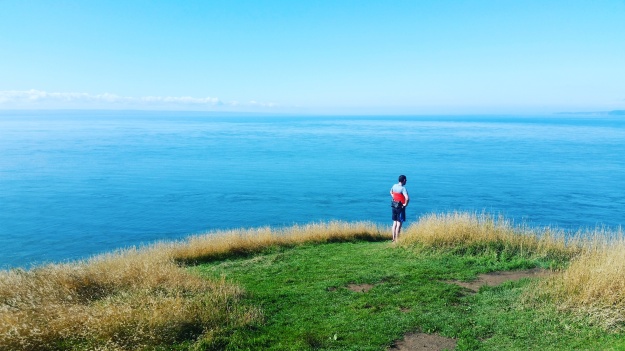 Best new piece of running gear: My new Garmin Forerunner 230! This was a mother’s day present from my girls and husband. Love it! Well, and my Tiux compression socks – man they were a life saver for me!! 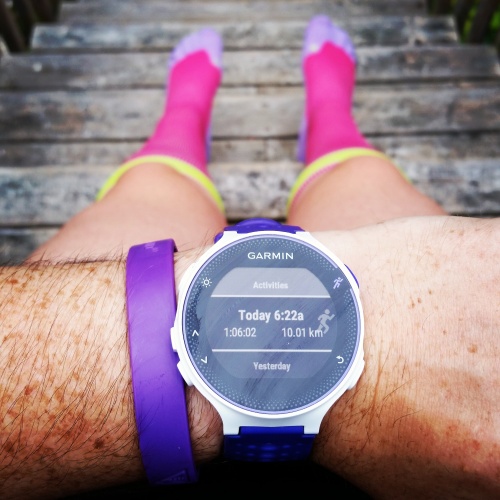 Best running advice you’ve received this year: There were many nights when I wanted to run but was just exhausted from the busy day at work and with our girls. On those nights my husband would always say “you’ll feel better if you just go”, “put on your gear and just start”. Without those nudges, I would have just missed the run.

Best Advice I Can Give: Listen to your body. When it’s saying enough is enough – listen.

Most inspirational runner:  I’d have to say Shalane Flanagan.

Favorite picture from a run or race this year: It’s not a race photo, though I do love the photo above from pacing the Valley Harvest Marathon. However, my favourite photo is this one bloew – running with my husband and daughters on January 1st. We now have a tradition of running our first km on January 1st together….even in the rain or snow! 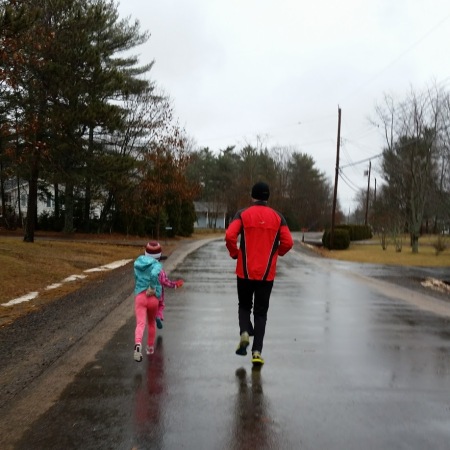 Race experience you would repeat in a heartbeat: Pacing the 10k – 1:10 finish at Valley Harvest. I love this pace and finishing time. Hands down, I’d pace this race again. I’d also repeat running the Berwick 5 miler Road Race – that was a fun distance and I really enjoyed the course.

Worst Running Moment: Hands down, finding out two days before my half marathon that I was having some heart problems. It was strongly suggested that I didn’t run my half that I worked so hard for in September. I was devastated. Luckily two weeks later, I passed my stress test and told to get back to running. But, oh the disappointment was HIGH!

Favourite Medal: These are my daughter’s medals after they both ran 800m and 1200m respectively. They both had a blast and finished with a smile on their faces. I love that they both love to run and enjoy it as much as I do. 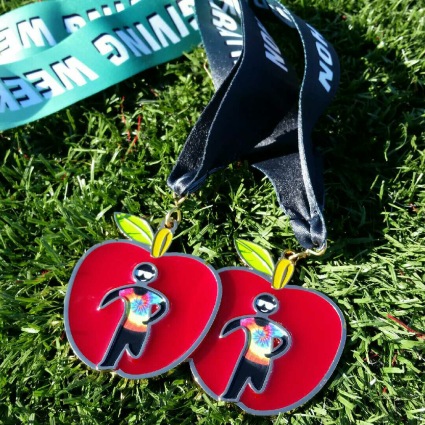 If you could sum up your year in a couple of words what would they be?  Physically hard (car accident/heart problems), rewarding (pacing the 10k) and challenging.

That’s how I’d sum up my running in 2017. With a car accident in late March I struggled to get back to running but managed a half in June. Only to train hard over the summer months to be told I had to stop running and then to finish off with pacing a local race made up for some of the devastation of missing my goal half marathon.
What was your best race or run of 2017?
Race you’d repeat in a heartbeat?
Worst running moment?
My 2016 year in running can be found here.

This time of year usually brings lots of snow to Nova Scotia, however it can be hit or miss depending on the temperatures. At the moment we have a few cm of snow on the ground, enough to make winter running a challenge.

Depending on the roads, I either run in just my sneakers or I throw on my yak tracks like I did this weekend. There are few people that put studs (or screws) on an older pair of sneakers and that works too. I’m thinking of putting some screws on a pair when I don’t want to wear my yak tracks but want some stability on the ice and snow.

We had a busy weekend of a basketball jamboree, library for the kids and cleaning the house for me, skating and then a Christmas sock exchange party for our kids. 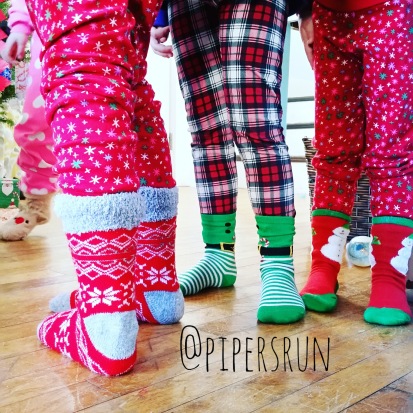 I’m not ready for Christmas and feeling completely unorganized but have a plan in place to get back on track before the holidays. It’s a different one this year as my husband who’s a paramedic works ALL Christmas 😦 It sucks big time but that’s life as we know it. We’re moving a few things around and Christmas will look a little different this year but we’re making the most of it.

Saturday afternoon while my parents were visiting and had the girls at the library, I snuck out for a 45 minute run. It was just what I needed. Yak tracks, Carmacks, snowy trails and me. 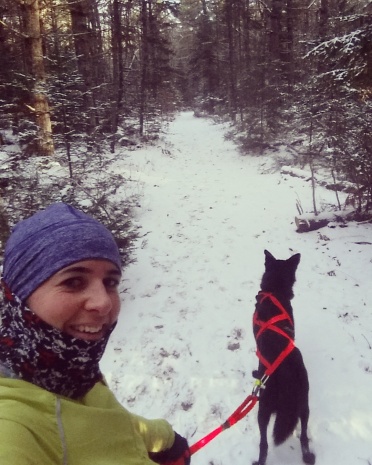 It was bloody cold out! It was -5c (23f) but felt like -11c (12f) and though I was dressed warm it was still a cold run. Eventually, I got used the the temperatures as my body warmed up but this was my first COLD run of the winter. I basically wear the same things when I run but layer up my core as the temperature drops more.

Winter running is always slower running for me and I’m just find with that. Carmacks is loving life running with us. Between Friday running with my husband (7k) and 6k with me Saturday he sure is raking up the mileage! 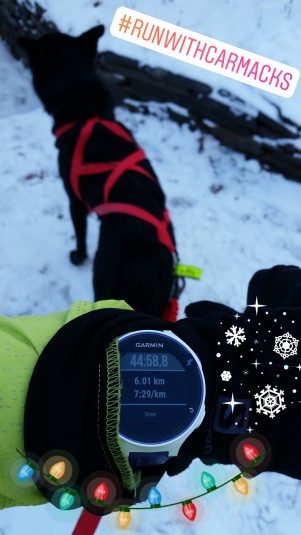 We’ve been working on turning around and running back towards the location we just came from and managed it pretty smoothly this time. It’s all a learning curve for us. It’s amazing how he can remember which way we have gone when having to decided between left (haw) and right (gee). I often didn’t even have to give him the commands (for lack of better word) to tell him which way to turn, he remember through scent I guess. He does not like stopping to pose for a photo!

Anyone else running in the snow?