Yesterday I whimped out of running outside and I’m totally cool with that.  It was BLOODY cold out. Thank goodness I had “The Beast” to run on at home.

In the warmth and comfort of my home.

With the wood stove going so I could be toasty when I stretched out my tired muscles afterwards.

And while the girls slept upstairs.

Treadmill, I’m sure glad I warned you about our date last night. You were on time and met my expectations. 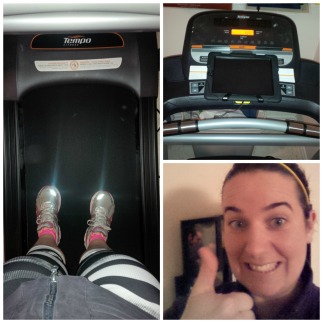 I added to my “Around The World Running Blogger Relay Challenge”  –> now up to 11 km.

Treadmill, you did not disappoint.

Runner’s solutions in Nova Scotia on a winter day.

Just like that we are done January 2014! Did it fly by for you or was it slow as a slug? I felt I had moments of both. With two little ones I always just want time to freeze because they are growing so fast. Before we know it they won’t want to snuggle anymore, hang out with us….who am I kidding…they’ll ALWAYS want to hang out with us and snuggle 😉

Last month I managed to get a good number of runs, soccer games and workouts in. I kept a little snap shot in my handy dandy “running” (turned workout) book. It looks a little something like this: 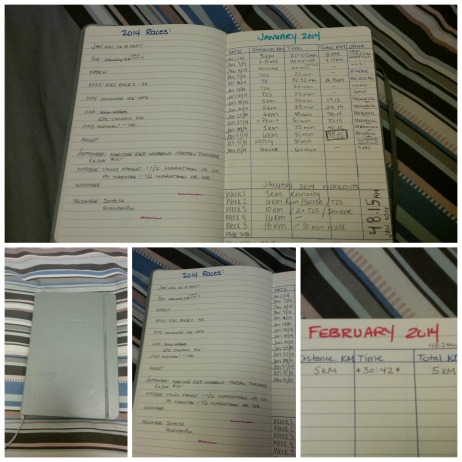 Yes, I know there’s an app for that but I like writing it down and having that tangible book that I can look at. Plus, I don’t have a personal cell phone but a Blackberry for work…and well, I don’t want to be glued to my work phone when I’m not at work.

Total kilometers I ran in January: 48 (29.82 miles) – This might not seem like a lot to you…but it is to me! All while working full-time and with my husband away fairly often. Soccer Games played: 2  Games missed: 2 😦 T25 Workouts at work:  3. I love getting my workout done at lunch AND have a workout buddy, thanks Melissa!

And, I may or may not have had my lunch in our boardroom at work….just so I could watch some of the Olympics! 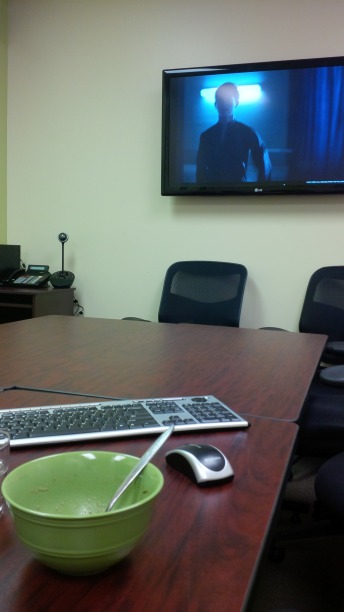 When your department is called “Health & Wellness, Physical Activity, Sport and Recreation” you can kind of get away with watching the Olympics randomly throughout the day! Tomorrow, we are all wearing RED to support our Canadians in Sochi!

Do you have any plans for February?

Have you given up on your New Year’s Resolutions already?

Are you pumped for the Olympics? What’s your favourite sport to watch?

Since today is World Physical Activity Day, that’s the field I work in and I am personally passionate about being active – it’s fitting that I post my #FLOW Fitness Loves of The Week.

This is what my weekly workout looked liked: (I set my workout goals every week and track them) 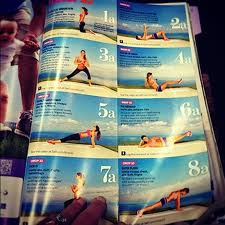 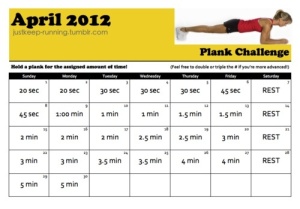 Plank Challenge found on Pinterest (of course). Original source is from JustKeep Running. I have modified the numbers as I was already doing 30 second planks from the Jillian Michael’s Ripped in 30 DVD. Last Sunday I started at 35 seconds and going from there – I’ll post about it next week in detail.
Work Out Jar: 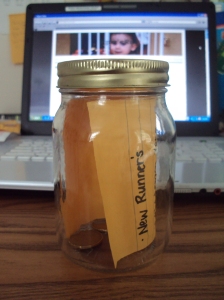 Back in February, I wrote about my Work Out Jar and how I put money ($2) in it each time I work out. It was a way to motivate myself, stay focused on my work out goals each week and then reward myself a little later on. Well, after about 2 months of working out 3-5 days a week, I now have $61 in the jar. (Well, out of the jar in the below picture). 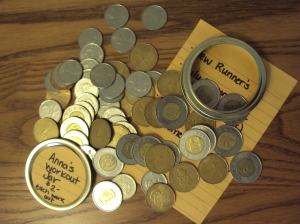 I’ve decided since I am “beefing” up my workouts that I will now start (beefing up) putting in $1 per 10 minute work out. So, if I walk during my lunch break for 20 minutes, then do a 20 minute DVD workout at home that night, plus the Drop 10 & Plank challenge (roughly 15-20 minutes) – I can put between $4 – $6 in the jar for one day’s workout!
Looks like those new runners are going to be here before we know it!!!!
Want to read more about Blogger’s Fitness Loves of the Week ? Click on the logo below!

What are you doing today to be active?

Getting active with your family ?

Going for that long run?

Let me start off by saying my little one has been sick for just under a week – terrible congestion, heart-wrenching  cough, irritable at times and not sleeping well because of the listed symptoms. But the good thing is, she’s happy, running around and wanting to play.

Also, my husband is home!!!! Woohoo, we have finished 7 months apart….7…long…months…apart.  He is home until June and then only away for a week or so, and then we’ll all be done with that adventure. Both he and I started to feel ill last night; we had no idea what this “cold” would amount to. 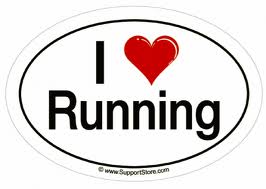 I plan each weeks workout goals every Sunday; which you can read more about here. So, today was my day to run which I was really looking forward to doing. Can you see where this is going? 🙂

Today, we woke up full of this cold my daughter had – she’s just learning about sharing but seriously…this is one thing she did not need to share with us. We were both miserable; head pounding, stuffed up nose and feeling run down.

I decided I would go to work and my husband (who is waiting on his “On the Job” schedule was able to sleep the morning away. By lunch time I was feeling terrible and was trying to decide if I was to go on my run. I went home for lunch, had some chicken soup  that he made for me and decided to go lie down – I would run later. (Again, you can see where this is going – right?).

We laid down just before 1 and around 2:30pm, I said to my husband “I don’t think I’ve slept for more than 5 minutes”. He then assured me that I had in fact slept as he informed me I was “snoring rather contentedly” !!!

I stayed in bed until 4:30 sleeping while my husband went to pick up Lilly. During this time I was trying to figure out if I was going to run in the evening and had my eyes closed during the whole thought process. I was really looking forward to this run. My bed was like a sauna and getting out was like stepping out into the cold of winter (seriously). 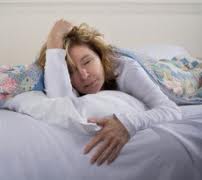 I assessed my symptoms:

My decision after assessing my symptoms: maybe not a full run, but a fast paced walk with our dog – with a few increases in speed.
Now this is not a pity blog post, it’s more of a “Do you run when sick” and “When do you draw the line?”
During dinner I decided not to run, not to walk the dog at an increased pace, but to sit and relax with my husband. I put extra garlic in our pasta, have been drinking lots of water and trying to increase my vitamin C intake.
There is no way I could manage anything physical active tonight. Pushing myself to run tonight could have made things worse and they could have made things better. Tonight, I chose REST over anything else – even though I am dying to go for a good run.
Maybe tomorrow night.
Do you run when sick?
When do you draw the line?
Do you listen to your body when sick or push through it?